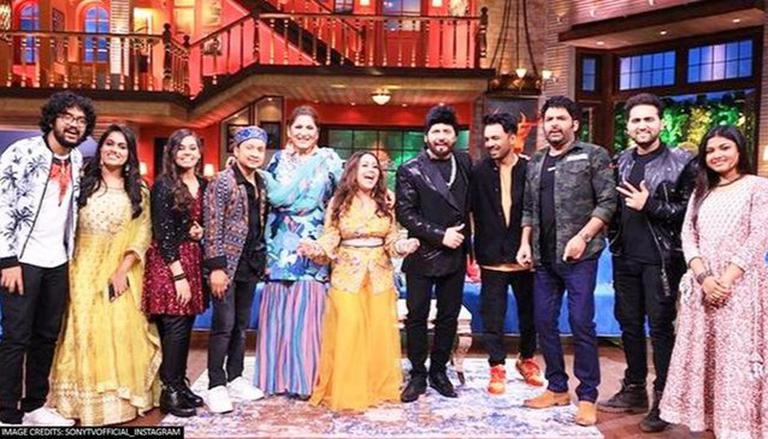 
The Kapil Sharma Show's  (TKSS) upcoming episode will showcase music sensations Neha Kakkar, Tony Kakkar along with the six finalists of Indian Idol 12 grace the show. The singing maestros will be seen indulging in hilarious banter with Kapil and the ensemble cast, giving fans an entertaining amalgamation of music and comedy. Indian Idol 12 finalists, namely Pawandeep Rajan, Arunita Kanjilal, Sayli Kamble, Mohammad Danish, Nihal Tauro and Shanmukha Priya will join the sibling duo, who can be seen shaking a leg with Kapil in a recent social media post.

Taking to her Instagram handle, Neha Kakkar can be seen clad in a yellow Indo-western outfit as she jams to her Kanta Laga song, with Tony and Kapil. Comedian Krushna Abhishek and Kiku Sharda can also be seen grooving with the singer on the song, which marked her collaboration with Tony Kakkar and Honey Singh.

The Kapil Sharma Show to have a musical weekend

Sony TV took to their social media handle, revealing the upcoming guests including the Kakkar siblings. Tagging the guests, the caption mentioned the 'Comedy Jagraata' bound to happen on the show. The group photo from the sets reads, "BHAI BEHEN KI JODI KO MILEGA IDOLS KA SANG, HASI PAR CHADEGA SURO KA RANG" (When the siblings meet the Idols, the laughter will be filled with musical colours).

READ | Neha Kakkar unfollows many on Instagram, says it's due to 'bad experiences'

Giving a peek into the BTS fun from sets, Neha can be seen grooving on her recent track alongside Kapil and Tony, before the trio bursts into laughter. Captioning the video, she wrote, "We love youuu Kapil Bhaiyaaa.. @kapilsharma ♥️ What episode we shot yesterday.. Oh god!!!!! @tonykakkar 🤣😍🥳💃🏻".  #TheKapilSharmaShow @sonytvofficial 🤗 #KantaLaga". Take a look.

READ | Neha Kakkar, Tony Kakkar & Yo Yo Honey Singh to unite for a huge music project? Check out

The singers, along with Honey Singh recently appeared on Sony TV's Super Dancer Chapter 4 to promote their chart-topping track Kanta Laga. The trio was also present at Colors' show Dance Deewane 3, where Neha made some interesting revelations about the kind of daughter she wants.

The upcoming weekend episode will also see cricketer legends Mohammad Kaif and Virender Sehwag spilling inside details from their cricketing days. The Kapil Sharma Show premieres on SONY TV on Saturday and Sunday at 9:30 PM.