Netflix India recently took their creativity to the streets of Mumbai and Hyderabad as they painted murals of the much-loved show 'Money Heist'. 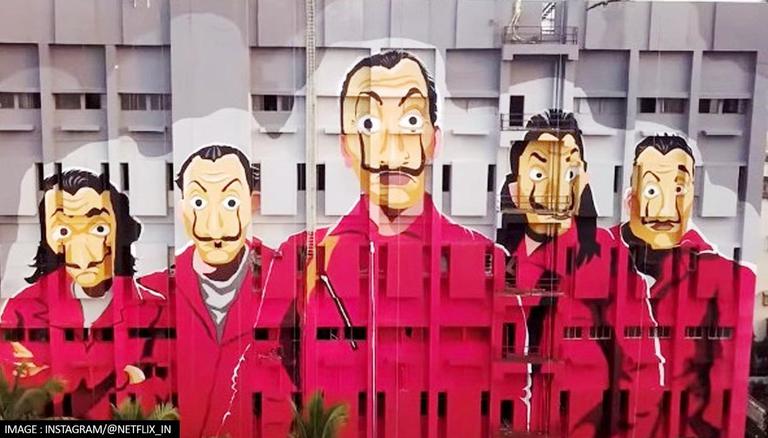 
Netflix India is known for their out-of-the-box projects and recently took their creativity to the streets of India as they painted murals of the much-loved show Money Heist.

They posted a video of the process on Instagram and YouTube, that featured individuals in the iconic Dali masks and red jumpsuits from the show, as they painted characters from the show across the country.

The final season of the show premiered on Netflix on December 3.

Netflix India took to the streets of India and gave fans and followers a glimpse into how they paid tribute to the much-loved crime drama in the country. They played the famous Bella Ciao in the background and also got fans of the show to lip-sync its chorus. The team painted Berlin, Denver, Tokyo, the Professor and several Dali masks. They also included fans posing next to their favourite characters and showcased the artwork. The team painted murals at Bandra and JVPD, Mumbai and at Necklace Road and Ameerpet in Hyderabad. In the caption, Netflix India wrote, "We gave spaces across Mumbai, Delhi and Hyderabad a massive glow up by painting the town red 🔴 Check out the behind-the-scenes action as red jumpsuits do one last takeover - but this time, of spaces you know and love in India as we say ciao to Money Heist. Watch the final chapter of Money Heist, only on Netflix."

This is not the first time the online streaming platform has given Money Heist a desi twist. The channel earlier collaborated with Bollywood's Ayushmann Khurrana, who stepped into the role of The Professor and performed on Bella Ciao. Khurrana posted the video, in which he is seen dancing to the iconic song in the bathroom. He is then also seen preparing for a red carpet event, at which he later appears in a Dali mask and red jumpsuit. The actor also gets a makeover, with which he looks exactly like the Professor. He wrote, "Once a Money Heist fan, always a Money Heist fan✊🏻 Fir chaahe woh bathroom ho ya red carpet event!"

READ | 'Money Heist': The Professor and his gang thank Indian fans for their love, Watch