'Special Ops 1.5' Twitter review is out. The Kay Kay Menon starrer has been hailed for Himmat Singh's RAW Agent character, its 'gripping storyline' and more 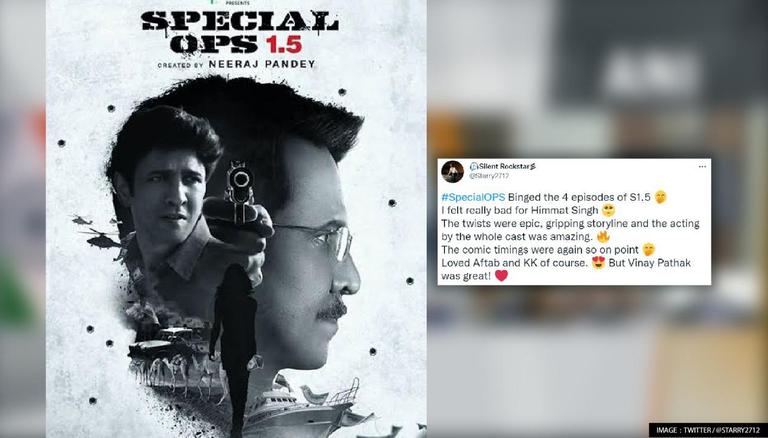 
Special ops 1.5: The Himmat Story has brought forth Kay Kay Menon's Himmat Singh in his formative years as a RAW agent. Just like the previous instalments of the show, the current season is packed with high octane stunts and blazing guns and Singh embarks into the despairing alleys to track down a top terrorist on loose. The Neeraj Pandey directorial also stars Vinay Pathak, Aftab Shivdasani and Aadil Khan among others in pivotal roles.

Shortly after its release today, ardent fans of the show pointed in their reviews about the Kay Kay Menon starrer, lauding his unmatched performance as Himmat Singh, the myriad twists right and 'whistle worthy moments' right from its onset as well as the director's brilliant attempt at securing a 'gripping' storyline.

The initial reactions of the audience indicate that the standalone instalment has fallen nothing short of its expectations. One netizen called it a "well-executed spy thriller" while another called it the 'best espionage series' the country has witnessed. One user wrote, "Off to a flying start #SpecialOPS 1.5, barely 20 min into the first episode and you'll be treated with a couple of whistle worthy moments." Another user also spoke about the 'on-point' coming timings, while specifically hailing Vinay Pathak's act as Abbas Sheikh.

#SpecialOPS Binged the 4 episodes of S1.5 🤭
I felt really bad for Himmat Singh 🥺
The twists were epic, gripping storyline and the acting by the whole cast was amazing. 🔥
The comic timings were again so on point 🤭
Loved Aftab and KK of course. 😍 But Vinay Pathak was great! ❤️ pic.twitter.com/4ZKoOKTP6J

Off to a flying start #SpecialOPS 1.5, barely 20 min into the first episode and you'll be treated with a couple of whistle worthy moments.

With only four episodes in the current instalment, fans have also urged the makers to bring out season 2 of the espionage thriller. "Eagerly waiting for the #SpecialOps 2.0 now", one user wrote. One Twitterati shed light on the show's plot becoming regular in the middle while the thrill factor not falling at par with their expectations. However, Menon's 'Terrific Performance' has still been the show's high point.

best espionage series from India, none of that family man nonsense. just go for it, Kay Kay Menon never disappoints.

actually exceeded my expectations, thank you @neerajpofficial, when is season 2?

#SpecialOPS 1.5 Starts off well on a fantastic note but then drops down in the middle as the plot becomes routine. #NeerajPandey's Structuring on a whole is good but his writing is mediocre, lacks that thrill factor even at the end. Terrific Performance from #KayKayMenon.

Though the twists & turns are quite predicted, but no one matches the act of @kaykaymenon02 as #HimmatSingh.

Eagerly waiting for the next season.

Set inside the Special Ops Universe, the story goes back to 2001, taking the viewers inside Himmat's initial years as the RAW agent. New entrants like Aishwarya Sushmita, Maria Ryaboshapka have been roped in to play pivotal roles alongside Gautami Kapoor, Parmeet Sethi, KP Mukherjee, and many others. The limited series has been released on November 12 via Disney+ Hotstar.