Mumbai Police is known for spreading awareness about issues using the latest trends. Here’s how they sent the message about road safety with ‘Squid Game’. 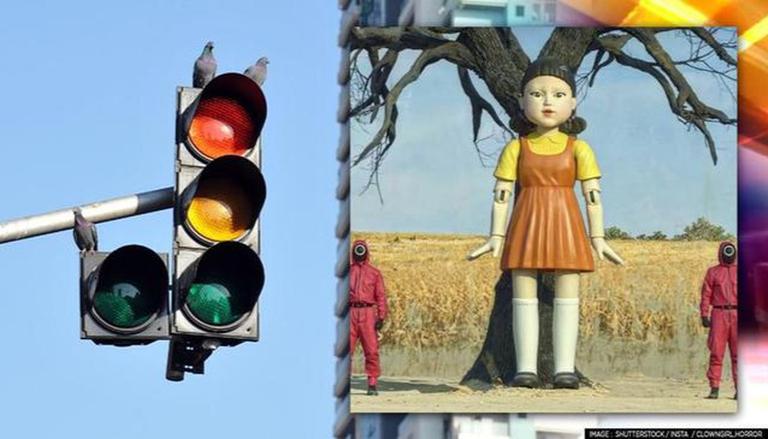 
The Mumbai Police is known for spreading awareness about important issues using the latest trends and references from pop culture. In their latest post, the Mumbai Police tapped into the buzz generated by Netflix’s hit K-drama series Squid Game, to spread a message about road safety. Squid Game is a survival game show that participants play in order to win a huge cash prize and pay off their debt. The nine-part series stars Lee Jung-jae, Park Hae-soo, Wi Ha-jun, Jung Ho-yeon, O Yeong-su, Heo Sung-tae, Anupam Tripathi, and Kim Joo-ryoung.

Directed by Hwang Dong-hyuk, Squid Game has been the talk of the town and has been ranking highly on Netflix ever since its release. The show recently hit the mark of 111 million views and the Mumbai Police took the opportunity to spread awareness through a reference from the show. Those who watched the show will definitely be aware of the first game of the series, Red Light, Green Light. The game requires participants to stop when a huge doll says, "Red light" and run to the finish line when she said, "Green light". What makes the game unique is that those who move when the doll says, "Red light" will be eliminated, that is, killed.

The Red Light, Green Light game is extremely popular on social media and fans are also using the Instagram filter to play the game themselves. The Mumbai Police took to Instagram on Thursday to tell citizens to save themselves from 'getting eliminated' and to ensure they stop at the red light. They also used unique hashtags to drive the message home as they wrote, "#SafetyNotAGame #EliminateSpeedGames". The caption of the post read, “You are the ‘frontman’ of your ‘game’ on the road: you can save yourself from getting eliminated. Stop at red lights.”

The audio playing in the background was the instructions given to participants on the show, over the speaker. It featured the first round of the game when player 324 becomes the first of the lot to get eliminated. The video that the Mumbai Police uploaded had a small tweak from the scene in the show, as the gunshot heard when player 324 was killed is shown with the graphic of two cars crashing into one another, thus spreading the message to obey traffic signals.

READ | 'Squid Game' Wi Ha-Jun a.k.a. Jun-Ho reveals one game he would like to be part of
READ | LeBron James watches 'Squid Game', says he 'did not like' ending of the show
READ | 'Squid Game' creator teases potential ideas for Season 2; intends to explore other stories

WE RECOMMEND
Param Bir Singh gets 4 notices from Mumbai police in extortion case; remains 'missing'
'Squid Game' comes under scrutiny of Parents council for being 'incredibly violent'
'Squid Game' Wi Ha-Jun a.k.a. Jun-Ho reveals one game he would like to be part of
'Squid Game' actor Kim Joo Ryoung says she 'felt sorry' for her character Han Mi-nyeo
'Shang-Chi' actor Simu Liu reveals which episode of 'Squid Game' traumatized him
Listen to the latest songs, only on JioSaavn.com