A 99-year-old Brazilian World War II veteran was recently discharged for the Armed Forces Hospital in Brasilia after recovering from the deadly coronavirus.

A 99-year-old Brazilian World War II veteran was recently discharged for the Armed Forces Hospital in Brasilia after recovering from the deadly coronavirus. Ernando Piveta had been a member of the Brazilian Expeditionary Force and was admitted to the hospital on April 6 after being treated in the facility’s ‘COVID ward’. While speaking to an international media outlet, the Brazilian Defence Ministry noted that the 99-year-old was also discharged on the same day as the 75th anniversary of the Taking Montese, which was a successful campaign by Brazilian troops in Italy during the war.

The video of the veteran being discharged on April 14 has taken the internet by storm. From a Deputy Government leader to the Brazilian Army’s official Twitter page, the video of the veteran has been shared by several official accounts. Netizens have been cheering the 99-year-old for successfully recovering from the deadly disease.

READ: Coronavirus: Pompeo Says China Did Not Give Americans Access When Needed The Most

While sharing the video, the Deputy Government leader wrote, “Another battle won! At 99, a veteran of the Second World War, the 2nd Lt. Ernando Piveta is the oldest to recover from COVID-19 in Brazil. He had been admitted to the Armed Forces Hospital since April 6 and was discharged this afternoon. Smoking snakes, eternal is your victory!”

The Southern Military Command, while calling Piveta a “National Pride”, wrote, “Our veteran war hero of the Brazilian Expeditionary Force-FEB Ernando Piveta, 99 years old, after 8 days interned at the Hospital das Forças Armadas on account of # COVID19 is discharged, on the same day that celebrates the 75th anniversary of the ‘Tomada de Montese’!”

READ: The Undertaker Issues 'All In Challenge' Amid Coronavirus In US; Nominates Post Malone

Great Spirit shown by the Brazilians!! Together we can defeat Corona!#worldfightcorona#respecttotheveteranfromðŸ‡®ðŸ‡³ 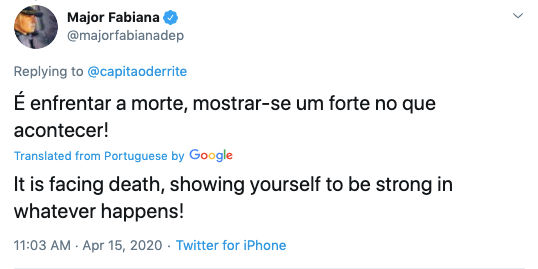 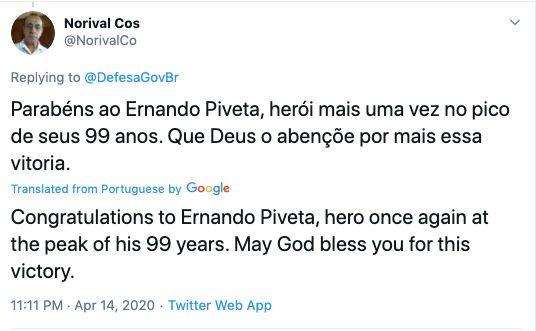 The Ministry of Defence called it a ‘victory’. They said, “ a moment, the ex-combatant of the Brazilian Expeditionary Force (FEB), Ernando Piveta, 99 years old, admitted to the Armed Forces Hospital (HFA) since the beginning of the month, will be released from COVID-19. One more victory!”

READ: Fact Check: Did Over 100 Doctors Die In Italy After Being Infected With The Coronavirus?