Video Of Confluence Of Alaknanda And Bhagirathi In Devprayag Wins Internet

A short video of the confluence of the two holy rivers, the Alaknanda and the Bhagirathi form together into the river 'Ganga', left netizens mesmerised.

The beautiful picture was captured by an Instagram user Aman Sharma who is a full-time travel content creator currently based in Spiti Valley, Himachal Pradesh. Speaking about the story behind the picture, Aman said that the picture was taken in Devprayag during his trip to Rishikesh which inspired him to travel more. The mesmerising view of the confluence that happens in Devprayag, in the Tehri Garhwal district, Uttarakhand is an absolute treat to the eyes.

Aman further explained how this beautiful picture, which went viral on social media, encouraged him to travel more. "This picture gave me an identity on Instagram as a travel photographer. I started travelling more and experienced many places and different shades of mother nature." The picture went on to become his favourite and he even created an animated version.

Read: PICTURES: Water In Yamuna At Delhi Looks Cleaner Amid Industry Shutdown Due To Coronavirus

Aman, who is known as @unplugged.camera on social media, got overwhelmed by the response his video received. He believes that the video touched the hearts of people and gave soothing vibes during the coronavirus lockdown. "This video gave a soothing vibe to people as they are unable to travel to their favourite places amid lockdown. I got an amazing response on Social Media," he said. The video won hearts on the internet and many people poured love and support in the comment section. "It reminds me of my hometown," wrote one user. "Made my day," wrote another. "Just mesmerizing and so soothing," commented another user. 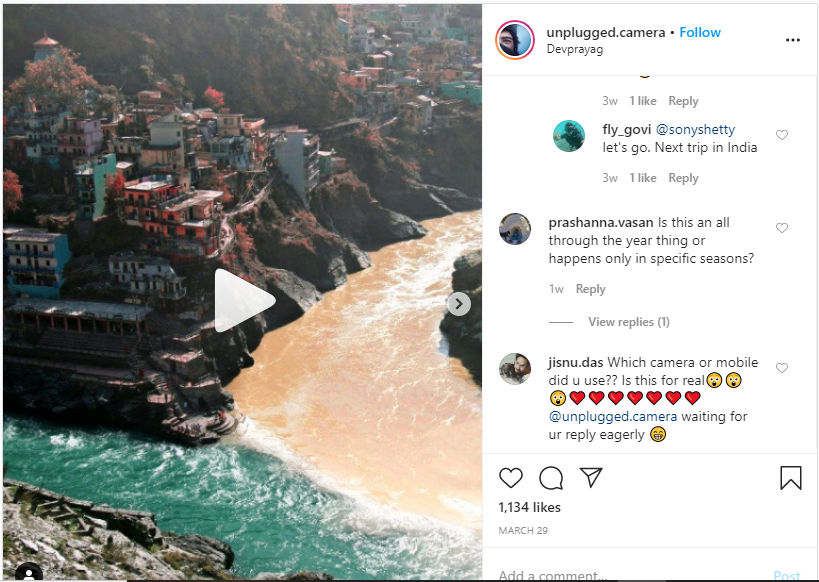 While this particular picture continues to garner attention and love, Aman's Instagram is filled with a plethora of such mesmerizing sights which he witnesses during his trips. While many people wonder which camera he uses to get such perfect shots, Aman revealed he clicks these pictures on his phone and even teaches mobile photography online. Take a look at some of the most beautiful pictures captured by @unpluggedcamera which truly depict the beauty of mother nature.

Read: 'I Can See Vikram Lander': As Pollution Drops, People Share Things They Can See From Home