Pitbull dog fetched blind chicken's toys while she watched TV, two even slept together and played with each other.The dog checked her first thing in morning.

Peri, a blind chicken adopted by a family in Phoenix, Arizona is 'best friends' with a Pitbull pup named Gracie as the two share an unbreakable bond of friendship. Just a few days old to the new adoptive house, Peri was down with severe eye infection while she was just 6 months old, suggest reports.

Christa Hubbard, the owner of the Chicken told the international media that the family made adjustments to help the chicken as she lost her sight. She said that they placed bowls on a throw rug that made noise, installed special low roosting bars, put an ottoman in the living room for the bird to ‘watch’ TV with family in the evening and an extra-large ottoman in their room for her to sit next to the bed. She said that she even hired a chicken ‘nanny’ to help Peri out.

According to the reports, Christa then put Taj, the family’s pet bulldog beside her to see what happens. The dog realized that something was different about the bird and he started being protective about her. She told the media that the Pitbull pup was only 3 months old when he was introduced to Peri but he quickly started helping her find the way around the house. She said he, however, passed away due to cancer and Peri was heartbroken. So, the family adopted new pups, and Gracie was one of them.

Read: From Meerkats To Honeybees, How Animals Make Important Decisions By 'voting'

Christa further continued saying that the chicken is now best friends with the Pitbull Gracie who immensely loved and cared for her. Despite having lost a friend, Peri could accept Gracie tenfold more fondly than she had been with Taj. And Gracie, equally affectionate of Peri, fetched her the toys while the blind hen watched TV. They even slept together, and played with each other, Christa said in the media report.

The first thing Gracie does in the morning as she wakes up was check up on the blind hen Peri, Charitareportedly said. Christa shared the photo of the two on Facebook, and the social media users were delighted to see the duo’s strong friendship. They left heart-warming comments for the two animals. 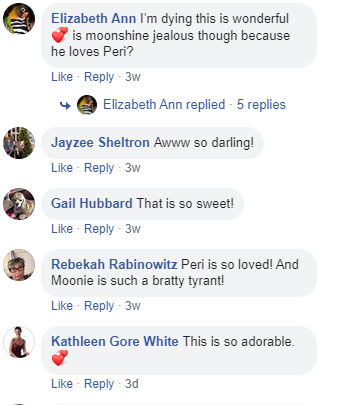 Read: Russian Woman Hailed As 'hero' After She Rescues Her Dog From Icy Pond