The bug is available as a Halloween prop named 'Debate Fly Wig'. The silver-coloured wig with a small fly on it has been priced at $49.95 (Rs 3652).

The fly that stole the show from Wednesday night's vice presidential debate between US Vice President Mike Pence and Democratic challenger Senator Kamala Harris is now a Halloween costume. The housefly that sat for several minutes on Pence's white hair as he debated with Harris, provided comic fodder for many. While the fly became the talking point of the world, it has been an inspiration for a Halloween costume on a US lingerie website called 3Wishes that has launched a ‘Debate fly wig’. 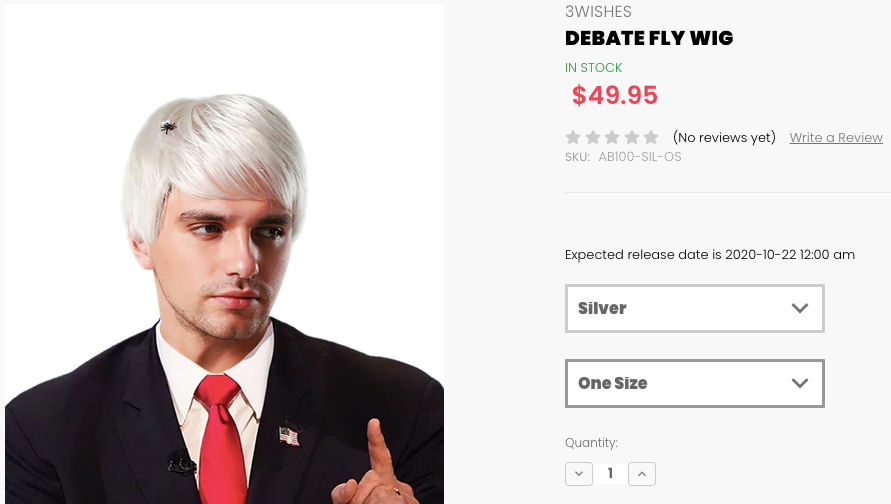 Priced at $49.95, the costume is a silver-coloured wig with a fly-like creature made to sit on the right side. As per the website, the wig is available in only 1 colour- ‘silver’ and has just one size. The description of the product read, "Make your head great again! Look fly and steal the spotlight at your next party with this Debate Fly Wig, perfect for when being a fly on the wall just won't do! You'll want to get caught in the crossfire with this special item featuring a deluxe, high-quality silver white wig with an attached, oversized black fly and Flag lapel pin included! Suit and plexiglass partition not included".

Soon after the incident took place, a new Twitter account was also created, called, “Mike Pence's Fly”. Many Twitter users are demanding SNL to invite Jeff Goldblum and recreate his iconic role from the movie The Fly.

Read: What Time Is The Vice-Presidential Debate Between Kamala Harris And Mike Pence?

i really did that pic.twitter.com/p5mTvt4gSz

WE RECOMMEND
2 weeks ago
'No signal': Censors block Mike Pence's remark during VP debate as he criticises China
2 weeks ago
Mike Pence's housefly moment has netizens demanding a Jeff Goldblum SNL skit, here's why
2 weeks ago
What time is the Vice-Presidential debate between Kamala Harris and Mike Pence?
2 weeks ago
US Vice Presidential Debate 2020 Live updates: Fierce Harris raids through Pence's defence
1 month ago
White House goes on attack against former adviser to VP Mike Pence