In an unusual discovery, scientists in Alamogordo, New Mexico’s desert traced fossilized footprints dented in the White Sands which they believe belongs to primitive humans from 10,000 years ago. The US National Park Service said in an official release on October 16 that the trackways and trample grounds along what used to be a Lake Otero carried footprints of ancient camels, sloths, Columbian Mammoths, child’s footprints that periodically show with other footprints, and a human carrying a child shifting trails on White Sand.

“For 80 years, only a small collection of fossil footprints were known. However, a group of scientists noticed dark spots dotting the expanse of the lakebed that appeared to be footprints,” the scientists at NPS revealed. They added, that the fossil footprints were in fact scattered along the now dried lakebed, around what may be ancient pools of water. Excavations at the odd dark spots found ancient Harlan’s Ground Sloth and Paleo-Human footprints on the site. The park discovered the footprints of a dire wolf located next to ancient seeds in 2010 from more than 18,000 years ago.

The lakebed of Lake Otero seems to be almost devoid of a single artifact that dates to before the Spanish exploration in the 1500s, let alone the ice age,” scientists said.

Meanwhile, scientists have also often discovered pieces of stone flakes from toolmaking, arrowheads, and spear points buried in the white dunes of the Tularosa Basin that sheds light on the life of ancient humans from the ice age. While the new discovery helps the scientists unravel the evidence of past life in the region, in 2018 the footprints of a female walking for almost a mile, with a toddler’s footprints and sloth’s explained the ancient man’s co-existence alongside ice age animals. However, scientists have long debated the cause of the disappearance of the great beasts of the ice age.

“An adolescent or small adult female made two trips separated by at least several hours, carrying a young child in at least one direction.

This research is important in helping us understand our human ancestors, how they lived, their similarities and differences," said lead author Dr. Sally Reynold of Bournemouth University in a release.

As many scientists believe that the ice age ended because of earth’s climatic changes, scientists at NPA said that fossilized footprints at white sand are an integral resource in understanding the interaction between extinct animals and humans from the ice age. Further, many significant discoveries in the Dunefield have the scientists urging to convert the White Sands National Monument into White Sands National Park as the area was an important reservoir for the planet’s geologic timeline. 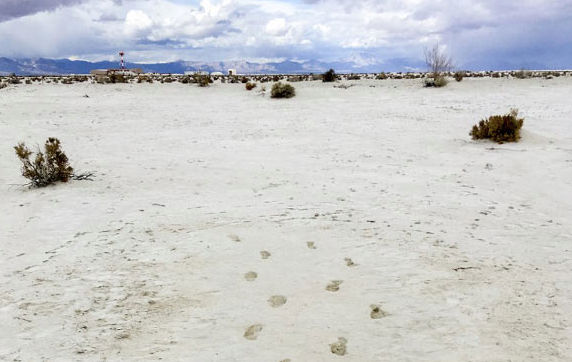