Fact Check: Was A Spanish Girl Singing In Sanskrit On Spain's National Radio?

Fact check: A video of a caucasian woman singing in Sanskrit was shared to be of a Spanish lady singing on the national radio but it has been proven wrong.

A 2 minute-long video of a caucasian woman singing in Sanskrit was shared by many people on Twitter. It was claimed that the video is actually of a Spanish woman and that the Spanish national radio plays a chant every morning in order to start their day. The video received thousands of views and likes on social media with people believing that the lady in the video is in fact Spanish. 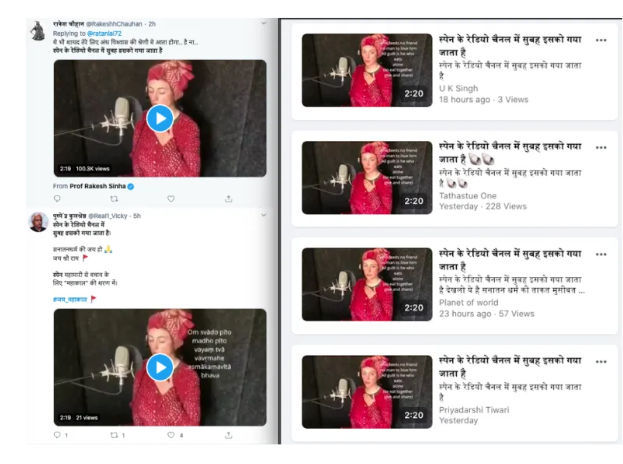 The caucasian lady in the video is not from Spain, but from the United Kingdom named Gabriella Burnel. She has a number of accolades for Sanskrit singing and has performed across the globe with her sheer talent and love for the Sanskrit language. The video in question here is actually from Gabriella Burnel's YouTube channel, where she has over 200k subscribers. Gabriella is actually singing a mealtime prayer in her private studio setting and not on the national Spanish radio. Gabriella has dedicated her life to the language of Sanskrit and had revealed that the language has helped her become a better person while speaking in an interview recently.

Listen to @gabriellaburnel who promotes the ancient Indian language of #Sanskrit in ðŸ‡¬ðŸ‡§& earned the nickname ‘the Cultural Ambassador of India in the UK’ – her work shows how much ðŸ‡¬ðŸ‡§continues to value Indian culture pic.twitter.com/lUOgmh0x7F

Also read: Fact Check: Has someone in Goa dressed up as a ghost to make people stay at home?

The video first started circulating on Twitter where various people thought that the video is of a Spanish girl singing in Sanskrit on the national Spanish radio. It was later uploaded on YouTube by various channels claiming the same thing. The first video shared on Twitter received over eight thousand retweets.