Fact Check: Did Donald Trump Really Collapse On The Floor Due To Overdose?

Fact check: Various social media users claimed that President Donald Trump had collapsed due to a drug overdose, but they have been proven false. Read more.

Off-late, social media ha evidently become a bizarre place to be. Various netizens make blatant claims which are not backed by anything concrete and do not hold any relation to reality. Facebook, WhatsApp messenger and various other social media platforms consist of a number of users who spread fake news and misinformation either to have a good laugh or purposefully spread fake news in an attempt to disrupt the society. Recently, various social meid users started claiming that President Donald Trump recently collapsed due to a drug overdose induced by Hydroxychloroquine. Check out the posts below -

Also read: Fact Check: Has COVID-19 Sensor Been 'inserted' In Every Phone? 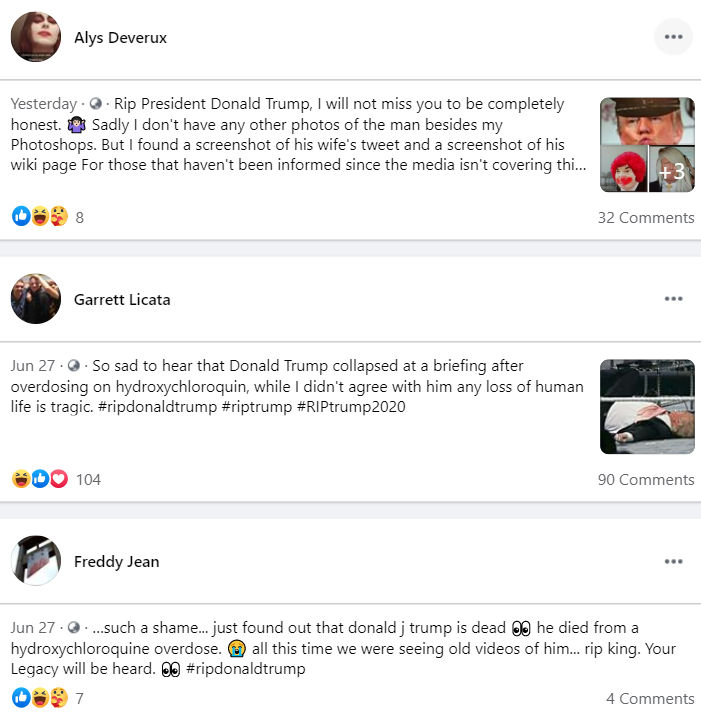 The photo doing the rounds on the internet now is actually from Donald Trumps's appearance in the wrestling show WWE. The current  President of the United States of America has had a number of appearances on the wrestling entertainment show. It is quite evident from the photo shared above that Donald Trump is laying down inside the ring of a wrestling match.

Also read: Fact check: Did Walter the meme dog die due to gunshot wounds in Philadelphia?

On the other hand, some extreme claims made by social media posts on June 27, 2020, stated that the president actually passed away due to an overdose caused by Hydroxychloroquine but Donald Trump has been active on his social media, especially Twitter, beyond just June 27, 2020, thus rubbishing the claims made by various social media users. The same picture had also reportedly done the rounds on the internet a few years back claiming that Trump had collapsed during a rally in New York but those claims were also later dismissed.

On the other hand, the claims made by various social media posts caused a frenzy on various portals. People expressed their distress over people sharing fake news asking them to check their sources before posting anything. Whereas others treated the fake news as a joke and chose to share memes and GIFs in the comment sections under the post.

Since the posts of Donald Trump collapsing due to a drug overdose started going viral on the internet, people took to Google and searched the find the truth behind the claims. This resulted in a surge of search results for topics like 'Donald trump overdose' and 'did Trump overdose'. Check it out below -

Also read: Fact check: Is 'Paw Patrol' getting cancelled for its portrayal of police?