As Cyclone Amphan approaches, the Odisha government has started the process to broadcast an SMS based alert system and play tower siren to evacuate people

As Cyclone Amphan approaches, the Odisha government has started the process to broadcast an SMS based alert system and play tower siren to evacuate people in the districts, which are expected to suffer the most due to the cyclone, said State Special Relief Commissioner (SRC), Pradeep Jena, on Tuesday.

India Meteorological Department Director-General Mrutyunjaya Mohapatra revealed that Cyclone Amphan in the Bay of Bengal had intensified into an extremely severe cyclonic storm on Monday. He added that it was expected to further intensify into a super cyclonic storm. According to him, the cyclone would cross Digha in West Bengal and Hatia island in Bangladesh in the afternoon or evening of May 20 with a wind speed of 155-165 km per hour.

Pradeep Jena said that cyclone will have some wind action today all along the coastal districts. Cyclonic storm Amphan lays over 470 km down south of Paradeep.

"The cyclone has already demonstrated its earliest signature in Bhubaneswar. We were informed that it is raining in Paradep and in some other areas. The evacuation process has started. We are also starting to broadcast an SMS alert system to all these districts. We will also start our location-based alert system in the afternoon. We will run siren and give messages," Jena told media persons here.

"The cyclone will have some wind action today all along with the coastal districts. Cyclonic storm Amphan lays over 470 km down south of Paradeep. It is likely to make landfall in between Digha, West Bengal and Hatiya islands, Bangladesh on May 20 between afternoon and evening," he added.

At the landfall time, the wind speed expected will be about 150 to 160 km. In Odisha and north- Odisha coastal districts, the concerned administration is expecting a wind velocity of 100 to 200 km per hour.

Earlier in the day, Cabinet secretary Rajiv Gauba chaired the third meeting of the National Crisis Management Committee (NCMC) to review the preparedness of states and central ministries/agencies to deal with the cyclonic storm 'Amphan'.

Chief Secretary, Odisha and Home Secretary, West Bengal participated in the meeting through video conference and apprised the NCMC of preparatory measures taken by them. They informed that the evacuation of people from the low lying areas is being carried out. All actions have been taken to stock food grains, drinking water and other essential supplies. Teams for maintenance and restoration of power and telecom services have also been positioned.

The meeting was also attended by senior officers from the Ministries of Home Affairs, Defence, Shipping, Power, Telecommunications, Health, IMD, NDMA and NDRF.

IMD releases damage potential in districts likely to be hit with super cyclone Amphan in West Bengal and Odisha. 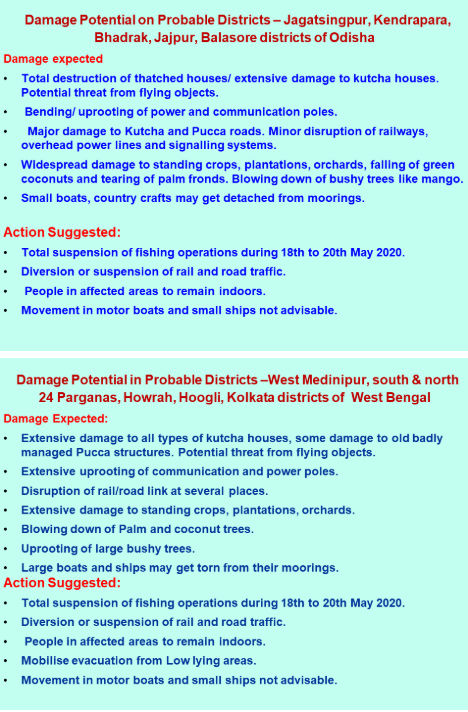