Bengaluru's COVID Rollercoaster: What Changed A 'contained' City To One Of The Worst-hit?

As Bengaluru emerges as the worst-hit metro city in India, clocking over 2000 cases per day this week, CM B S Yediyurappa has ruled out lockdown extension 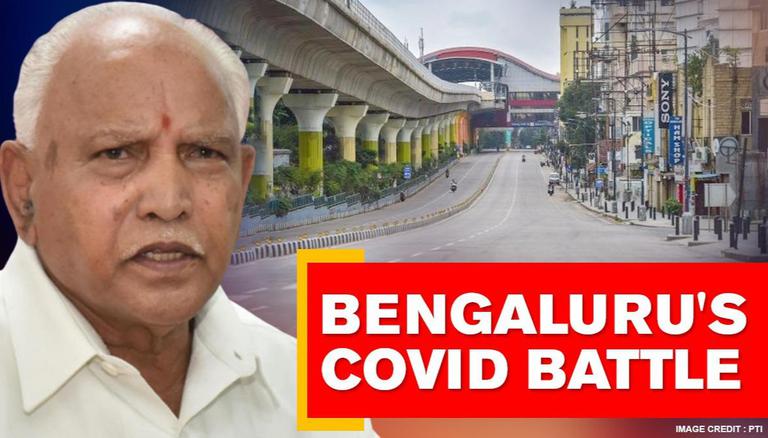 As Bengaluru emerges as the worst-hit metro city in India, clocking over 2000 cases per day this week, Chief Minister B S Yediyurappa has ruled out an extension of lockdown. Bengaluru - India's tech capital - is under stringent lockdown from July 14- July 22. Earlier on Saturday, the city's civic chief -  B.H. Anil Kumar who had opined that a lockdown of at least 15 days was necessary to break the cycle, was replaced by former Bruhat Bengaluru Mahanagara Palike (BBMP) Commissioner - N. Manjunath Prasad., as per government order.

Bengaluru to be put under 1-week lockdown from July 14 as COVID-19 cases surge: Sources

Bengaluru, which was hailed for its scientific approach and excellent contact tracing, has recently seen a sharp surge in cases, inching closer towards Mumbai's active case tally. The city currently has over 15,065 active cases and 4326 recoveries. While Mumbai has seen a steady increase of 1000-1500 cases on an average for this month, Bengaluru reported 2125 cases of the 4537 cases reported on Saturday. As of July 18 evening, cumulatively 59,652 COVID-19 positive cases have been confirmed in the state, which includes 1,240 deaths and 21,775 discharges.

Factors which led to Bengaluru's rise in cases

As per COVID19India, Karnataka which started tested 4500 samples when only 146 cases were reported, saw a major surge in testing in May - testing 10,000-12,000 samples per day. Karanataka insisted on ramping testing, inspite of having low fatality. As India opened up in June, testing was ramped up in most states reporting a surge, but Karnataka's testing rate remained constant from 10,000 to 15,000 - some days seeing even a dip in testing to as low as 5362 samples per day. With the fears of community transmission prevalent in its capital Bengaluru, the state government has once again ramped up its testing to 30,000 samples per day and rising. This includes a mass usage of Rapid Antigen kits, as recommended by ICMR.

As early as March 13, Karnataka had banned all large gatherings as it witnessed India's first COVID fatality in Kalaburgi, invoking the Karnataka Epidemic Diseases Act, 1897. The state officials along with its health workers and police staff implemented one of the strictest lockdowns in Bengaluru. But as India allowed more relaxations, Bengaluru lifted most of its restrictions in June - allowing unrestricted vehicle movement, the opening of private offices, malls, stand-alone stores and markets, as per reports.. Medical Education Minister K Sudhakar has blamed the non-compliance of social distancing and kickstarting of economic activities as the reason for the surge.

No extension of lockdown in Bengaluru: BBMP Commissioner

Initially, Karnataka's capital Bengaluru has maintained its low numbers due to its effective tracking, with teams tracing 47 contacts per positive case. But as per the recent data on BBMP's dashboard, the source of transmission for 85% of the cases is still under investigation. While Karanataka's health portal has been lauded as being the most informative, reports state that BBMP was not feeding realtime data in real-time, derailing the state war room's containment strategies.

As India opened up, experts in the city had expected a surge in Influenza cases, triggered due to the onset of monsoon. Experts are expanding their random testing, as health experts believed that they are in the community transmission stage in June. As per the city's COVID dashboard, 7% of the city's Influenza-Like Illness (ILI) and Severe Acute Respiratory Infection (SARI), above primary contact - which is only in 5% of the cases.