In a massive blow to India's economy, India's second quarter GDP (July-September) numbers stand at 4.5% - the slowest growth in seven years, as released by NSO

In a massive blow to India's economy, India's second quarter GDP (July-September) numbers stand at 4.5% - the slowest growth in almost seven years, as released by Central Statistics Office on Friday. The previous quarter (April-June) GDP numbers were at 5% and the Q2 (2018-2019) stood at 7%. This development comes inspite of the  government's various conomic moves like merger of 9 PSU banks into 4, major corporate tax cuts, policy changes in the automobile sector, reduction in tax regulations to boost foreign income, attract investors and increase the consumer demand. The government currently follows the base year of 2011-12.

Rupee slips 11 paise to 71.73 against US dollar ahead of GDP data

Here are the full details: 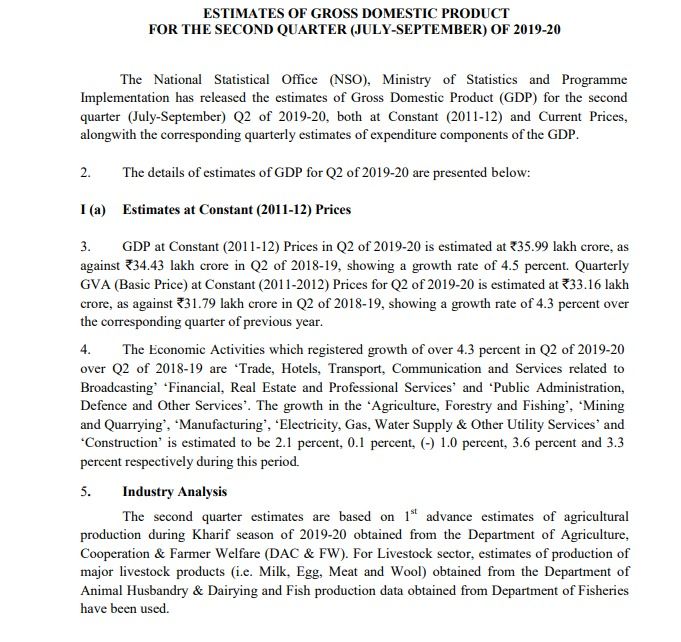 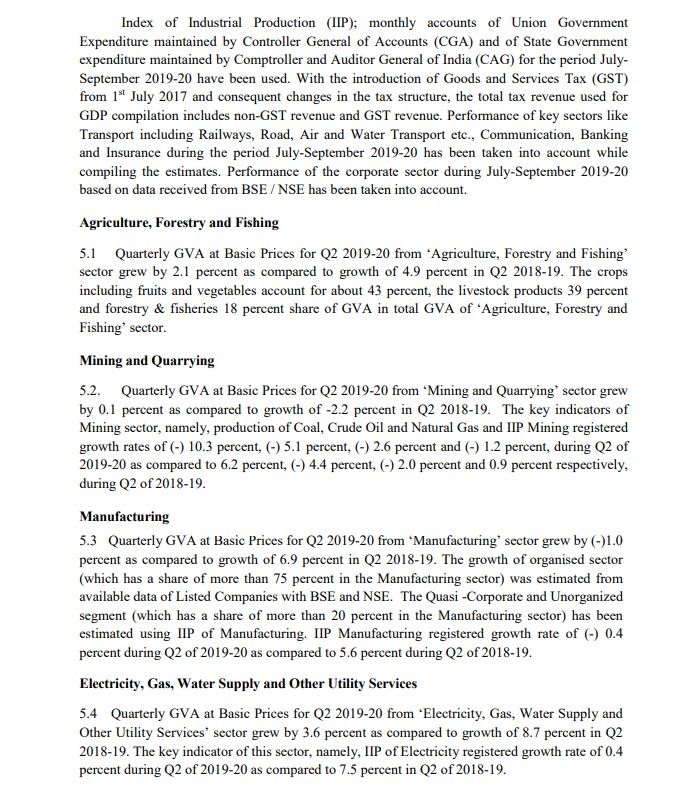 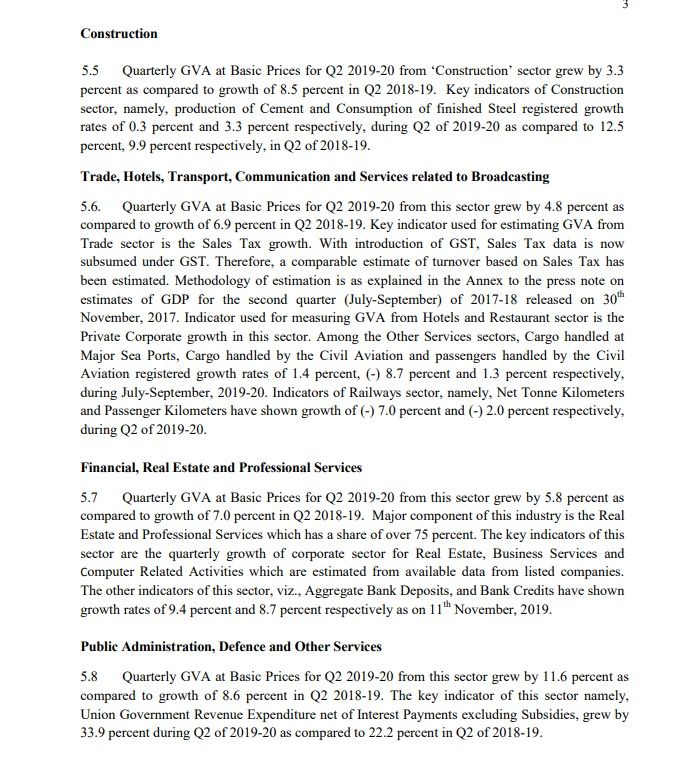 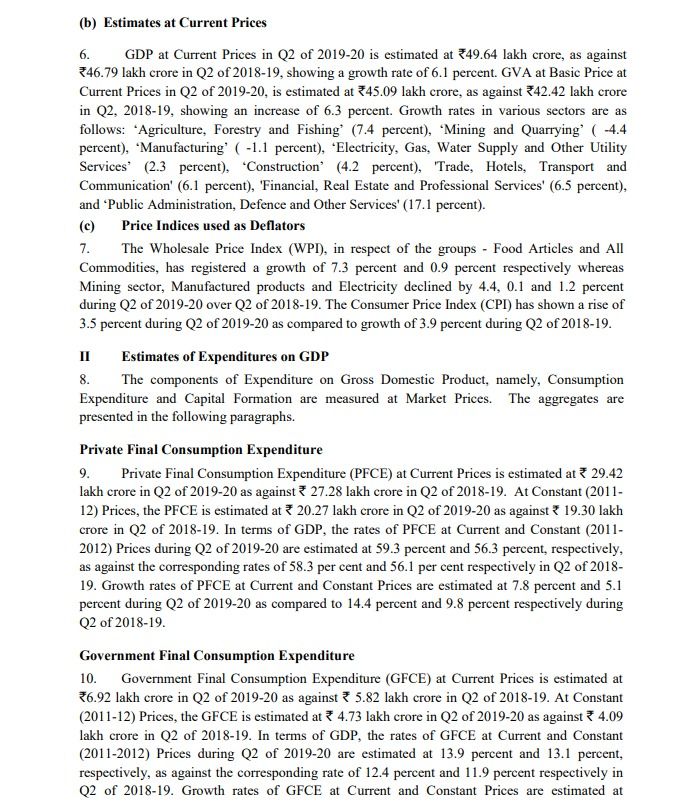 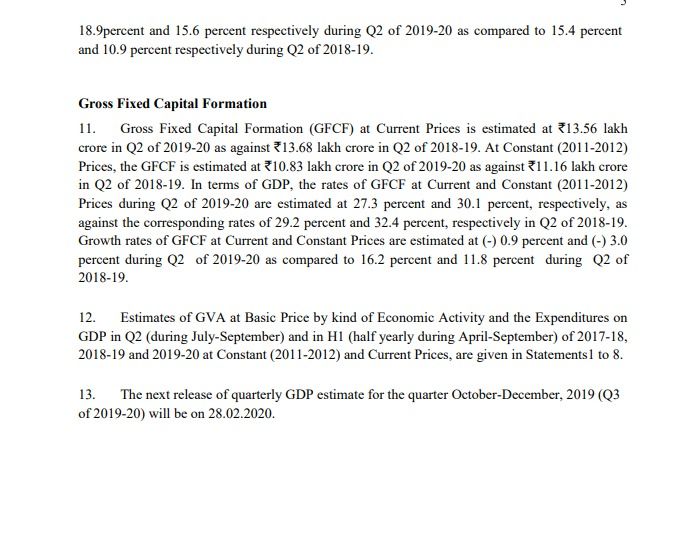 Sensex falls over 100 points ahead of GDP data

The official numbers released by the government showed that 8 core industries output in October declined by 5.8%. The Gross Value Added (GVA i.e GDP without taxes) grew 4.3% in July-September 2019 compared to Q1 when the growth was 4.9%. The recent slump in growth reflects the poor growth in economy due to the slump in manufacturing, automobile industry, retail, agriculture.

Meanwhile, in September inspite of the many economic boosts, the farm sector grew 2.1 percent in the second quarter of 2019-20, due to delayed arrival of monsoon. Moreover, following a declining trend, manufacturing sector grew by 1% indicating at the stagnant demand of goods. Apart from this,  Society of Indian Automobile Manufacturers (SIAM) data stated that sale of vehicles declined 23.7% during July-September.

Earlier on Thursday, the government had told the Rajya Sabha that the  Advisory Committee on National Accounts Statistics (ACNAS) has recommended that 2020-21 as the base year for calculating GDP. The panel had felt that 2017-18 was not the best year for base calculation. Several experts had cautioned against the selection as 2017-18 saw the turbulence felt because of GST and demonetisation. The govt panel  had recommended 2017-18 to be used as base year instead of 2011-2012, in view of the likely availability of requisite data. The base year had been replaced to 2011-12 from the old series base year of 2004-05, as per the recommendations of the National Statistical Commission.

Previously in November, International financial analyst Moody's had changed the outlook on India from 'stable' to 'negative' due to persisting growth concerns. Moody's had cited that as the government had failed to narrow the budget deficit, it had to change its outlook. The government's fiscal deficit had crossed over 92% of its full-year target in the first six months.

PEOPLE HAVE PLEDGED SO FAR
Rupee slips 11 paise to 71.73 against US dollar ahead of GDP data
No recession in Indian economy: Finance Minister Nirmala Sitharaman
IPL 2020 Auction: 3 Indian stars who have been rejected on their base price over the years
UK Government applauds 'remarkable' rise of Indian students in country
Rahul Dravid pays biggest tribute to current Indian pace attack, calls it the 'best ever'
PSUs should be given freedom to take decisions: Swamy
Coronavirus impact China''s trade: India to benefit in apparel
Gujarat received IEMS for industrial investment worth Rs 3.43 lakh cr
DO NOT MISS
DELHI VIOLENCE TIMELINE
'DELHI VIOLENCE AN INTEL FAILURE'
IT MIN MEETS MICROSOFT CEO
AADITYA DEMANDS APOLOGY
INSPIRED OR COPIED?
CAT'S REACTION AMUSES TWITTER