The Congress party has released the third list of its candidates ahead of the Jharkhand assembly elections to be held in five phases between Nov 30 and Dec 20.

The Congress party has released the third list of its candidates ahead of the Jharkhand assembly elections to be held in five phases between November 30 and December 20. The list comprises 19 candidates contesting in the various phases of the elections. The Election Commission (EC) announced the assembly polls date for Jharkhand on November 1. Addressing a press briefing, Chief Election Commissioner (CEC) Sunil Arora said that voting to 81-seats of Jharkhand Assembly will be held in five phases. 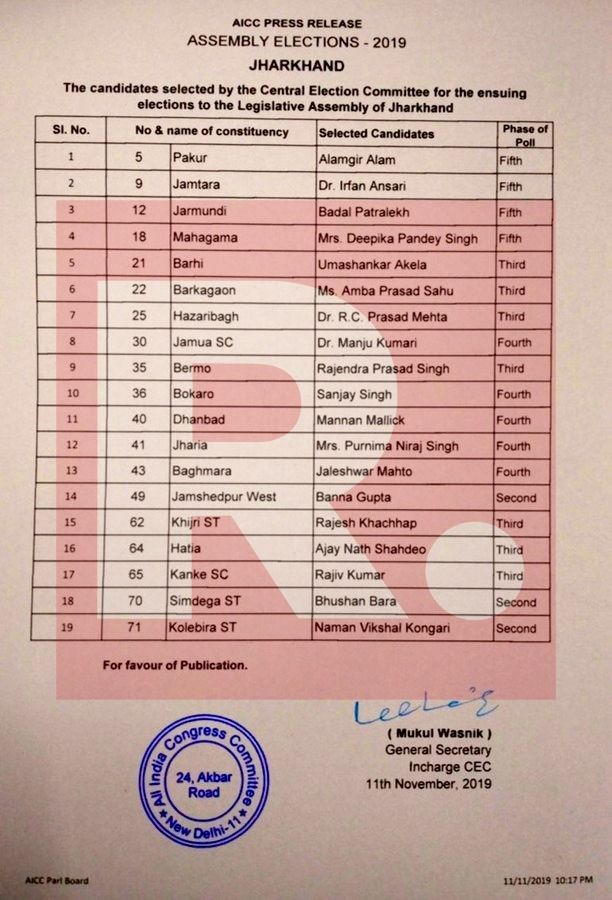 Seat-sharing between Congress, JMM, and RJD

The Jharkhand Mukti Morcha, Congress, and Rashtriya Janata Dal will be contesting the Jharkhand assembly elections together. The alliance has decided that Former Jharkhand CM Hemant Soren will be their CM face. Also, Congress will be contesting on 31 seats in the state, whereas Lalu Prasad Yadav’s RJD will contest on seven seats. The largest chunk of the alliance share will be going to JMM as they will contest on 43 seats under the leadership of Hemant Soren.