Confirming its Maharashtra Legislative Council nominee, Congress on Saturday, has selected Rajesh Rathod as its candidate for the upcoming elections in May

Confirming its Maharashtra Legislative Council nominee, Congress on Saturday, has selected Rajesh Rathod as its candidate for the upcoming elections. This comes a day after BJP chose Pravin Datake, Gopichand Padalkar, Ajit Gopchade, and Ranjitsingh Mohit Patil as its nominees for the elections. Curiously, senior BJP leader Eknath Khadse yet again missed a nomination in the list, inspite of his public interest to represent the BJP in the MLC elections. 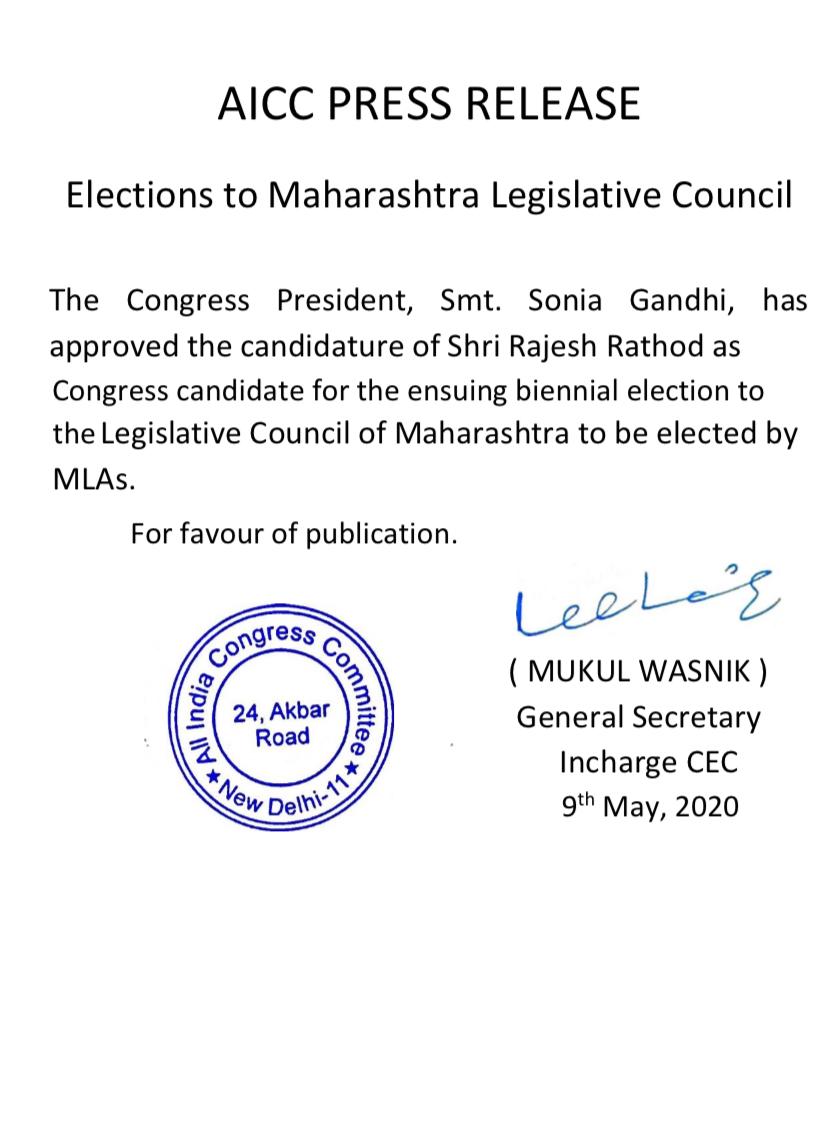 On May 4, Shiv Sena selected CM Uddhav Thackeray and current Deputy state Council chairman Dr. Neelam Gorhe as its candidates to the state council in the upcoming elections of the 9 vacant MLC seats. Gorhe is a 3-time MLC whose term expired on April 24, 2020, while Thackeray has never held an elected post. Meanwhile, Ramdas Athawale-led Republican Party of India (RPI) has demanded a Council seat in from its alliance partner BJP, as it has been with the BJP since 2012.

Previously, on May 1, the Election Commission of India (ECI) decided to hold elections to the Legislative Council in Maharashtra after 21 days - prior to Thackeray's term expires. This decision had occurred after Governor Bhagat  Singh Koshyari had requested the same. This development comes a day after Thackeray spoke to PM Modi over the governor's delay in nominating him to the council.

On April 27, the state cabinet sent a reminder to Governor Koshyari on nominating Thackeray to the Maharashtra legislative council as the governor's pick. The nine seats of MLC by MLAs became vacant on April 24,  held by Neelam Diwakar Gorhe, Hemant Prabhakar Takle, Anand Rajendra Thakur, Smita Uday Wagh, Prithviraj Sayajirao Deshmukh, Kiran Jagannath Pawaskar, Arunbhau Janardan Adasad, Chandrakant Batesing Raghuvanshi and Harisingh Narsu Rathod. If he is not elected to the Council by six months of taking oath as CM- which will end on May 28, Thackeray will have to resign as CM.