Amid student protests in several campuses over CAA, NRC, police action against students, JNU mob attack, country's 208 academicians including Vice-Chancellors and professors on Saturday, have written to PM Narendra Modi slamming far-left politics plaguing India's top universities. In the letter, they claim that universities are being disrupted by left-wing agendas in the name of student politics - naming incidents in JNU, AMU, Jadavpur. Lamenting over the discontinued academic activities, the faculty ranging from the Central University of South Bihar to Delhi University and several IITs state that the students are being radicalised.

"We observe with dismay that in the name of student politics a disruptive far-left agenda is being pursued. The attempt to radicalised the students at a young age is stifling free-thinking and creativity," stated the letter. It added, "This has not only lead to violence between different sections of students but also intolerance against the teachers and intellectuals. They also lose out on the freedom to articulate their own views and alternative politics. We appeal to all democratic forces to come together and stand for academic freedom, freedom of speech and plurality of thoughts."

Here is the entire letter: 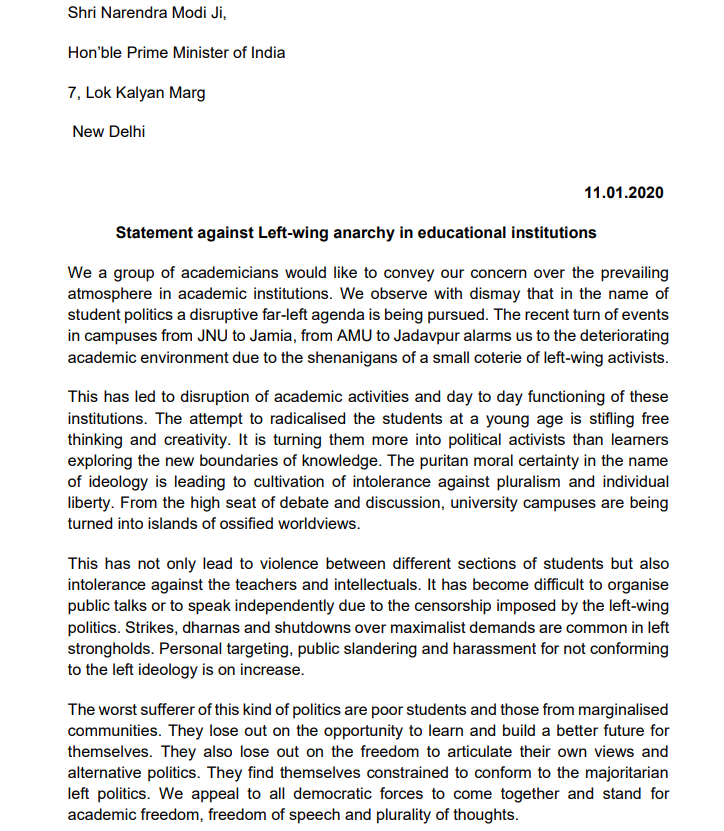 Cong' fact-finding panel on JNU violence calls VC 'cancer', says he should be in 'jail'

The protests against CAA which began in Assam has now spread throughout the country. Violent protests were witnessed in Uttar Pradesh, Assam, West Bengal, Gujarat, Karnataka, Bihar, Delhi, and Maharashtra. While thousands have been detained by the police throughout the country, at least 27 people have died till date in these protests. Several universities  - Jamia Millia, Aligarh, Madras University witnessed clashes between police and students which resulted in alleged lathi- charging, tear gas and rubber pellet action by police and vandalism by protestors.

On January 5, a clash between JNUSU & ABVP  was witnessed when students and teachers using iron rods, by entering hostels with the aide of 'masked mob'. 34 students and faculty members were admitted to AIIMS hospital - including JNUSU president Aishe Ghosh who was discharged from hospital on Monday. The Delhi police has filed three FIRs on the attacks on January 3,4 and 5 over the boycott of winter course registration and named nine students including Ghosh - majorly from JNUSU. Several universities protested against the brutal attack on the students.