A day after Health Ministry's statement that a steep rise in the Coronavirus cases was mostly the Tablighi Jamaat linked ones, BJP leader Amit Malviya has on Sunday shared a graph stating that it was 'extremely irresponsible' of Jamaat. Referring to various reports wherein Nizamuddin Markaz attendees and Jamaat members were found spitting on health workers, he said that they should apologise and 'start behaving responsibly.'

This One Video Captures India's Pitched Battle Against The Deadly Coronavirus; WATCH 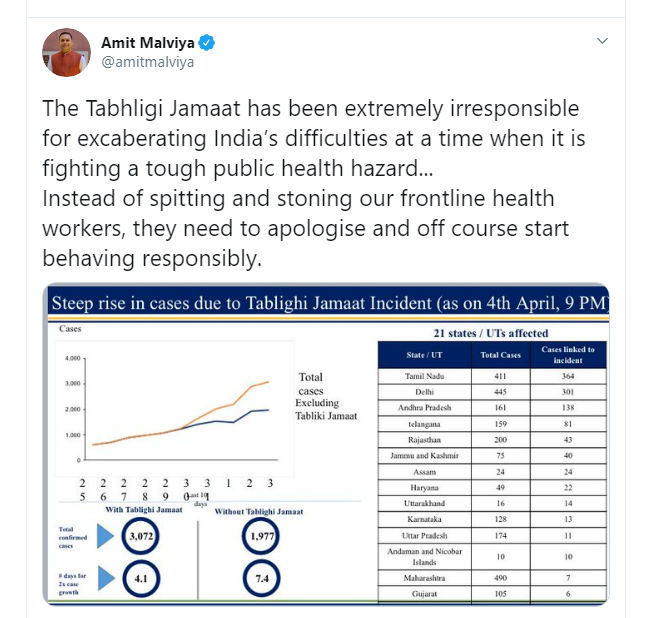 READ: Explained: Here's how power system will be managed during lights-out on Sunday

Tablighi Jamaat had in mid-March organised the Markaz event in Delhi's Nizamuddin mosque and hosted over 2000 people, from India and abroad, amid Coronavirus outbreak. After attending the meeting, which took place prior to the nationwide lockdown, many of the attendees returned to other parts of the country.

The Nizamuddin West area emerged as a hotspot of COVID 19 spread, days 24 people who attended the congregation tested positive, leading to a nationwide tracing of the attendees. Earlier, issuing a statement on behalf of Nizamuddin Markaz Tablighi Jamaat's chief Maulana Saad, his lawyer said that he has not gone underground and urged the attendees to help the administration.

As per updates by the Union Ministry of Health and Family Welfare on Sunday, there are 3030 active coronavirus cases in India, while 213 are cured/discharged/migrated people and 77 deaths have been reported. Maharashtra has maximum number of cases - 490, followed by Tamil Nadu at 485 cases and Delhi at 445.

There has been a spike in number of cases in the country after the attendees of the Markaaz went across and came in contact with several others. As per health ministry, at least 1,023 confirmed cases of infection have been found to be linked to the Tablighi Jamaat congregation, but massive efforts by various authorities have led to nearly 22,000 people linked to the religious grouping and their primary contacts getting quarantined. Overall, tens of thousands are quarantined but their overall number could not be ascertained.

The Tablighi-linked infections, found across 17 states, including Tamil Nadu, Delhi, Andhra Pradesh and Uttar Pradesh,  showed that almost 30% of them are from "one particular place where we could not sort of understand it and manage it", Union Health Ministry Joint Secretary Lav Agarwal said on Saturday.