Locals lined up at the entrance of the Sulur airbase since morning and were waiting to pay last respects to CDS Bipin Rawat and others. 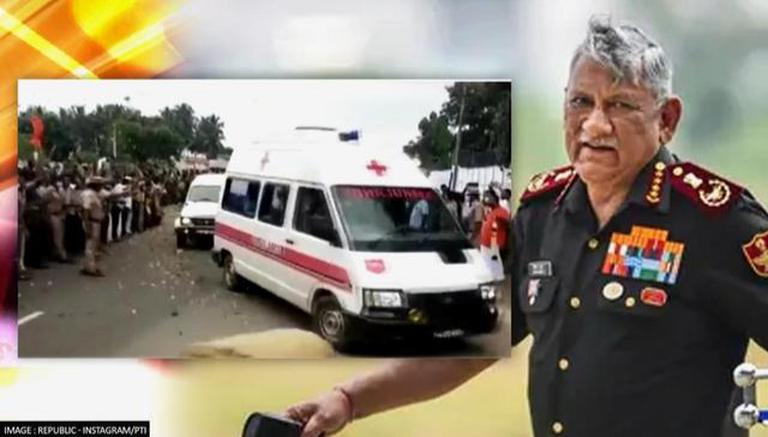 
The sentiments of the locals attained new heights when the mortal remains of CDS General Bipin Rawat, his wife and other Bravehearts of the Indian Armed Forces reached the Sulur airbase in Tamil Nadu on Thursday afternoon. The locals were lined up at the entrance of the Sulur airbase since morning and were waiting to pay last respects to the departed souls. As soon as the ambulances carrying the bodies of General Rawat, his wife and 11 others reached Sulur airbase, the people of Tamil Nadu accorded a touching tribute to the martyrs. More than a thousand locals who had lined at the entrance gate since morning started chanting "Bharat Mata ki Jai" and showered flower petals.

Mortal remains of CDS, and his wife will be brought to his official residence

It is worth mentioning India's first CDS General Bipin Rawat, his wife Madhulika and 11 other defence personnel died in a tragic helicopter crash at Tamil Nadu's Coonoor on 8 December. According to the statement released by the Indian Air Force, he was heading towards Wellington to attend a programme when the ill-fated helicopter crashed in the dense forest area. Meanwhile, on Thursday, after paying tribute to the Bravehearts, Indian Defence Minister Rajnath Singh announced the names of the people on board. "The IAF helicopter included CDS Bipin Rawat, his wife Madhulika Rawat, Defence Assistant to CDS Brigadier LS Lidder, SO to CDS Lt. Col. Harjinder Singh, Naik Gursewak Singh, Naik Jitendra Kumar, Lance Naik Vivek Kumar, Lance Naik B Sai Teja and Havaldar Satpal that crashed before landing at the scheduled destination," said Singh in the Parliament on Thursday, 9 December.

As per the procedure, the mortal remains will be brought to Delhi via IAF plane by Thursday evening. According to the defence minister, the mortal remains of General Rawat and his wife will be brought to his official residence on Friday, 10 December, where people would be allowed to pay their last respects from 11 am to 2 pm. The last rites of General Rawat and other military personnel will be performed with appropriate military honours, added Singh. He further informed that the Indian Air Force has ordered a tri-service inquiry into the accident and the investigation will be led by Air Marshal Manavendra Singh.