In a massive development, BKU national president Bhupinder Singh Mann who was appointed to Supreme Court committee to speak to farmers has recused himself

In a massive development, BKU national president Bhupinder Singh Mann who was appointed to Supreme Court committee to speak to farmers in order to end the deadlock over the farm laws has rescued himself. In a letter, Bhupinder Singh Mann has said that he will not consider any offer in order to "not compromise with the interests of Punjab and farmers of the country." He also said that he will stand with farmers of the country and is recusing himself in light of the "sentiments and apprehensions amongst farm unions and farmers."

S. Bhupinder Singh Mann Ex MP and National President of BKU and Chairman of All India Kisan Coordination Committee has recused himself from the 4 member committee constituted by Hon'ble Supreme Court pic.twitter.com/pHZhKXcVdT

Here is his letter: 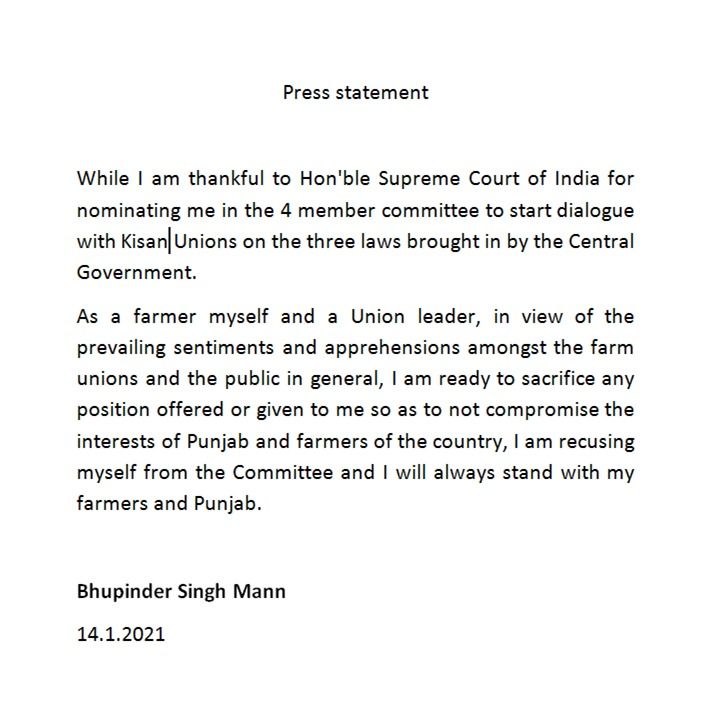 The apex court had formed a 4-member panel comprising agricultural economist Ashok Gulati, BKU national president Bhupinder Singh Mann, Pramod Kumar Joshi- Director, South Asia, International Food Policy Research Institute and Shetkari Sanghatana president Anil Ghanwat to solicit the views of farmers and the Union government. This panel has been directed to submit its recommendations pertaining to the farm laws to the SC within two months from the date of its first sitting.

A three-judge SC bench comprising Chief Justice SA Bobde, Justice AS Bopanna and Justice V Ramasubramanian laid down the roadmap for the resolution of the standoff over the three farm laws passed by Parliament. It has not only ordered that the Minimum Support Price system in place before the enactment of the agrarian legislation shall continue but also made it clear that the landholdings of the farmers shall be protected. Additionally, the representatives of all farmer unions, irrespective of whether they are holding a protest or not, have been asked to participate in the deliberations of the 4-member committee and put forth their viewpoints. Though the court said that it did not intend to stifle a "peaceful protest", it appealed to the farmers' unions to convince their members to get back to their livelihood as a result of this "extraordinary order".