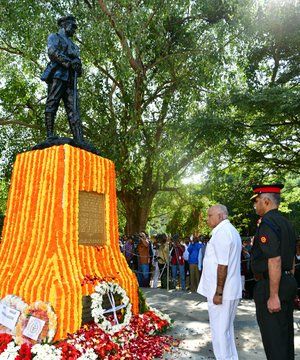 Yediyurappa also took to Twitter to remember the Indian warriors. The tweet translates to: “Today's Vijay Diwas is a day to remember how Bharat has always extended a hand to neighbouring countries and their citizens. This day marks the rise of Bangladesh. I wish our proud army for making 93,000 Pakistani soldiers put down their weapons and surrender on this day. Let's pay our respects to the martyrs of the 1971 Indo-Pak war. Let's remember our Bharat's proud warriors today."

The sacrifice of our soldiers who made India's victory possible on this day in 1971 against Pakistan was honoured in the presence of Shri. B. S. Yediyurappaji, CM of Karnataka; Shri. Basavaraj Bommai, Home Minister; Police Commisione; Defence Officials and the Citizens. pic.twitter.com/LV1yWQB9KT To commemorate India’s victory in the 1971 Indo-Pakistan war that led to the liberation of Bangladesh, then East Pakistan, December 16 is celebrated as Vijay Diwas. The war started on December 3, 1971, and lasted for 13 days. The Pakistani forces and General Amir Abdullah Khan Niazi along with 93,000 troops surrendered to the Indian military and East Pakistani freedom movement group Mukti Bahini. The war ended in the Ramna Race Course which is now known as Suhrawardy Udyan in Dhaka.

December 16 is a national victory day of . This day is celebrated all over the country and in the whole world. This day is locally known as “Bijoy Dibos”. Here, “ Bijoy” means “Victory"......#আমার_সোনার_বাংলা_#আমি_তোমাই_ভালবাসি,🇧🇩❤ pic.twitter.com/tVGQutmbhW

Surrender of Pakistan army at 4:15 Pm, 16th December,1971
Birth of Bangladesh.
Some pictures of our glory#VictoryDay pic.twitter.com/mab5Xt9Pcl

READ | Bangladesh Asks For List Of Illegal Migrants In India, Ready To Take Them Back