Congress Distances Itself From Adhir Ranjan's Tweet On China: 'Not Party's Stance'

Distancing the Congress party from their Lok Sabha leader of Opposition - Adhir Ranjan Chowdhury, Congress' Deputy Leader in Rajya Sabha Anand Sharma, on Friday, stated that Chowdhury's views on China were personal and does not reflect the party's position. Chowdhury had stirred controversy with a now-deleted tweet, addressing China amid India-China's Army standoff earlier in the week. BJP has slammed Chowdhury for deleting the tweet alleging he must have face heat from the party.

The Indian National Congress recognises and values the special strategic partnership between India and China. As two ancient civilisations and large economies of the world both countries are destined to make a significant contribution in the 21st Century.

In retaliation to China's standoff, Chowdhury claimed that the Indian forces knew how to 'defang them'. Moreover, he warned China stating that the world was watching their 'expansionist' designs. In a bizarre suggestion, Chowdhury urged India to accord diplomatic recognition to Taiwan - breaking India's traditional position adhering to the One-China policy. 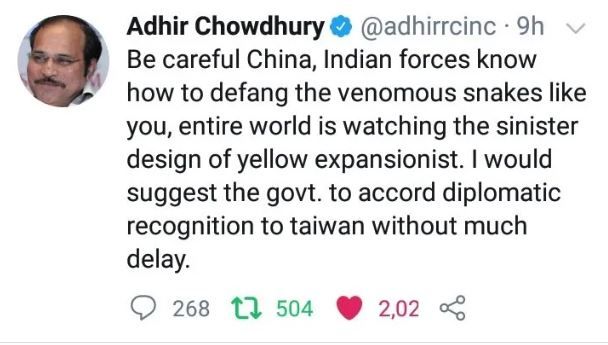 US asks China to release Panchen Lama, says 'no right to appoint next Dalai Lama'

Apart from the two armies' standoff, the Air Force was forced to rush its fighter jet patrols in Ladakh after Chinese military choppers were found to be flying close to the Line of Actual Control on Tuesday. "The Chinese military helicopters were flying very close to the Line of Actual Control. After their movement was picked up, the Indian Air Force fighter jets flew patrols in the area," government sources told news agency ANI.

Border stand off in Sikkim

Indian Army sources on Sunday morning stated that the defense forces were involved in a stand-off with their Chinese counterparts near the India-China border in north Sikkim. The confrontation is reported to have taken place near the Naku La Sector and was solved later after local-level talks between the authorities. Minor injuries were reported on both sides, and Indian Army sources went on to state that as per established protocol, the stand-off was resolved mutually. Such kind of incident has taken place after some amount of time in the region, almost 2 years after the Dokalam stand-off.