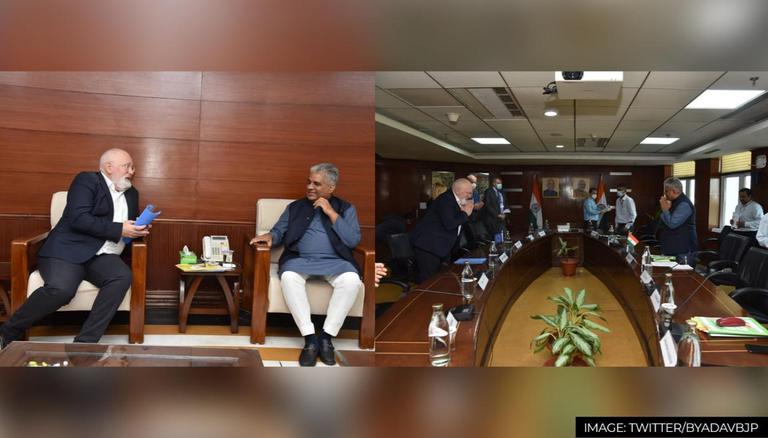 
Union Minister for Environment, Forest and Climate Change, Bhupender Yadav on Thursday held a key meeting with the Executive Vice President of the European Green Deal of the European Union, Frans Timmermans in New Delhi spoke on various issues that need to be addressed in the upcoming COP26. He further underlined the need to resolve the pending issues within all the countries.

Union Minister Yadav also stressed the urgency to take strong action regarding climate and further the need for initiating the process of setting the long-term climate finance further aiming towards the fulfilment of the goal of 100 billion US dollars as committed by the other developed countries. Apart from that, he also discussed the issues related to COP26 and further emphasised the relations between India and the European Union.

According to a press release issued by the Ministry of Environment on Thursday, both sides agreed on bringing up and resolving unsolved issues further taking national priorities and circumstances into consideration.

Apart from that, Yadav and Timmermans discussed many other issues which include technology transfer and the promotion of low carbon pathways.

Earlier on Monday, Environment Minister Bhupender Yadav held a virtual event of the Like-Minded Developing Countries (LMDC) Ministerial meeting and emphasised the reduction of carbon emissions as the remaining global carbon budget is very low. The meet was titled "Preparations for COP 26 on Climate Change-Expectations and Challenge."

Meanwhile, the 26th United Nations Climate Change Conference will be held in Glasgow in the United Kingdom starting from October 31 till November 12.