The IAF on Sunday stated that the LCA Tejas & Sarang Helicopter Display Team have exhibited "Superior flying skills" on the opening day of the Dubai Air Show. 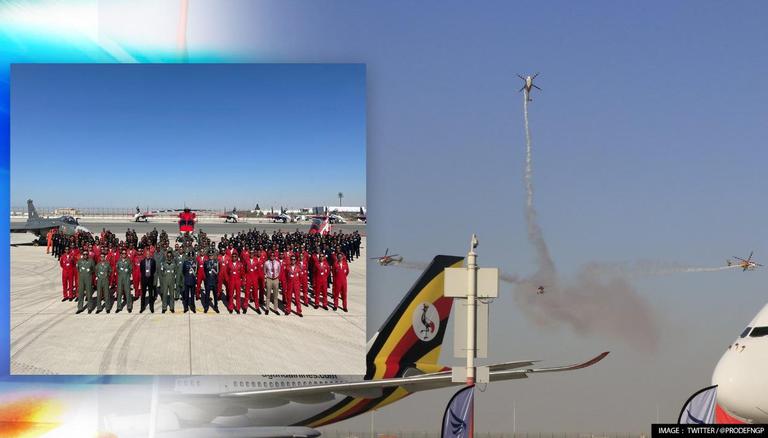 
The Indian Air Force (IAF) on Sunday stated that The Light Combat Aircraft (LCA) Tejas and Sarang Helicopter Display Team have exhibited "Superior flying skills" on the opening day of the Dubai Air Show. The Air show commenced on November 14 and will continue till November 18, Thursday. At Dubai's Al Maktoum airport, Sheikh Hamdan bin Mohammed bin Rashid Al Maktoum who is the Crown Prince and Chairman of the Executive Council of Dubai officially inaugurated the event.

On the opening Day of the #DubaiAirshow the @sarang_iaf & LCA Tejas showcased their superior flying skills and left an indelible impression of the capabilities of the @IAF_MCC and the rapid strides of the Indian aviation industry. @SpokespersonMoD pic.twitter.com/7eDbz0HiOh

While flying across the sky, Tejas demonstrated its exceptional flying abilities, agility, and simplicity of control, ANI reported. Highlighting their performance in the event, IAF took Twitter to express anticipation and stated, “Winter is here but we just turned up the heat”. IAF further stated that LCA Tejas, Suryakiran, as well as the Sarang aerobatics team, put on a perfectly synchronised show.

"Winter is here but we just turned up the heat."@IAF_MCC LCA Tejas alongwith Suryakiran and Sarang aerobatics team put up a precisely coordinated display on the opening day of the #DubaiAirshow.#Ready,Set,Go pic.twitter.com/NwoBJOYv6U

Furthermore, on November 9, the advanced light helicopters (ALH) of the Sarang Team, the BAE Hawk 132 aircraft of the Suryakiran Team, and three LCA Tejas aircraft were all introduced at the show. The Sarang Helicopter Display Team gets their title from the Sanskrit word for peacock and operates the Dhruv, an Indian-made Advanced Light Helicopter (ALH).

Sarang is the first four-helicopter military demonstration squad around the globe. The team has performed risky stunts in Singapore, the United Arab Emirates, Germany, the United Kingdom, Bahrain, Sri Lanka, as well as Russia in the past. The crew at the Dubai Air Show is led by Wing Commander Girish Komar.

In addition to this, the Suryakiran Aerobatic Team (SKAT) operates the IAF's Hawk 132 aircraft that conducts a nine-plane aerobatic show, which has previously been performed in Sri Lanka, Myanmar, Malaysia, Singapore, Thailand, Laos, as well as China with the Indian-made Kiran Mk II aircraft. The team is led by Group Captain Anoop Singh.

READ | Rajnath Singh addresses IAF officers, says 'must be ready to respond at a short notice'

Further, the Indian Air Force's indigenous Light Combat Aircraft (LCA) Tejas is led by Manish Tolani, the Tejas' Unit Captain. Meanwhile, as per sources, earlier it was stated that the IAF would operate beside aircraft from other nations, including the Saudi Hawks, Russian Knights, as well as the UAE's Al Fursan.