After the finality of Nirbhaya rape case occurred with all four convicts hanged to death, the International Commission of Jurists, called it an affront to law

After the finality of the Nirbhaya rape case occurred with all four convicts hanged to death, the International Commission of Jurists, called it an affront to rule of law and does not improve access to justice for women. It has also denounced executions and asked India to abolish the death penalty. All four convicts were hanged simultaneously - a first in India - at Tihar Jail at 5:30 AM.

Quoting senior lawyer Vrinda Grover, it pointed out, “In 2013, the criminal laws were amended; however, seven years later the graph of rapes has not diminished". It also quoted the UN Human Rights Committee's stance on respect for 'Right to life'.

FINALLY: Four convicts hanged to death in Delhi 2012 gangrape and murder case at 5:30 AM 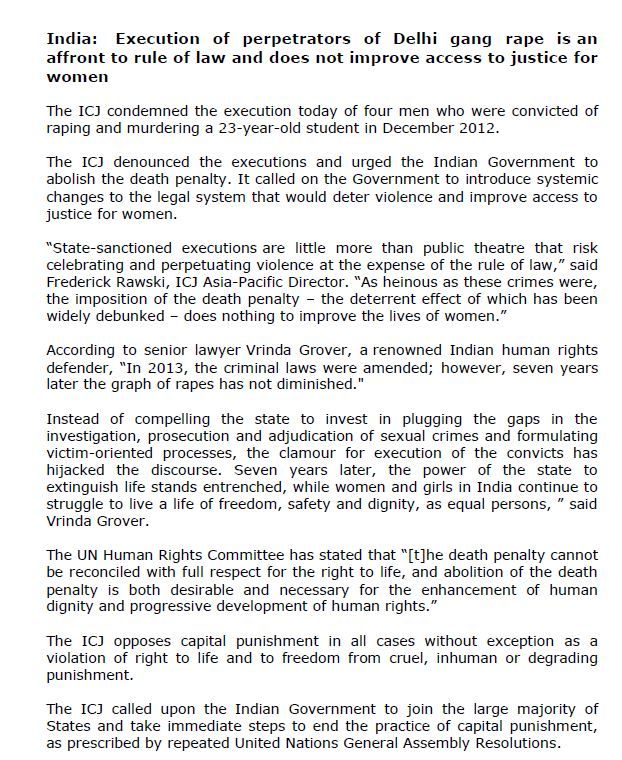 Seven years and three months later, on March 20 the four convicts in the Delhi 2012 rape and murder case - Mukesh Singh (32), Pawan Gupta (25), Vinay Sharma (26) and Akshay Kumar Singh (31) were executed on Friday at 5.30 AM, after a long delay attempt. A guard of not less than 10 constables, warders, and two head constables, head warders or an equal number from the prison armed guard, were also present during the hanging. Hundreds of people gathered outside the Tihar central jail ahead of the execution on Friday morning, carrying placards to celebrate the historic moment.

The case saw a long court battle through the years, but ultimately - the mercy petitions and curative petitions of all four convicts were dismissed by the President and Supreme Court respectively. The Patiala House Court ordered that the convicts be hanged on March 20 at 5:30 AM after issuing a fresh death warrant which was the fourth such date after the previous three dates- January 17, January 31 and March 3 were deferred by petitions filed by the convicts. Inspite of last minute delay tactics by the convicts', the Delhi HC upheld the death warrant five hours before the hanging and the Supreme Court dismissed a plea of one of the four death row convicts against the rejection of his second mercy plea by President Ram Nath Kovind at 3:30 AM on Friday.

What is the Nirbhaya case?

A 23-year-old paramedic student Nirbhaya was gang-raped inside a running bus by six persons on December 16, 2012, in Delhi. The victim was severely assaulted and thrown out on the road along with her male friend and succumbed to injuries a few days later. Out of the six convicts, one reportedly committed suicide in prison, while another, a juvenile, served maximum punishment of three years in a reform home and was set free in 2015. The remaining four rapists were awarded the death penalty in 2013 and hanged - seven years later.