The death toll due to the novel Coronavirus rose to 1301 and the number of cases climbed to 39,980 in the country on Sunday, with 78 more deaths and 1,511 fresh cases being reported in the past 24 hours, according to the Union Health Ministry. The number of active COVID-19 cases stood at 28,046 as 10,632 people were cured and discharged, and one patient migrated, the ministry said.

Here is the state-wise tally of COVID-19 cases in the country: 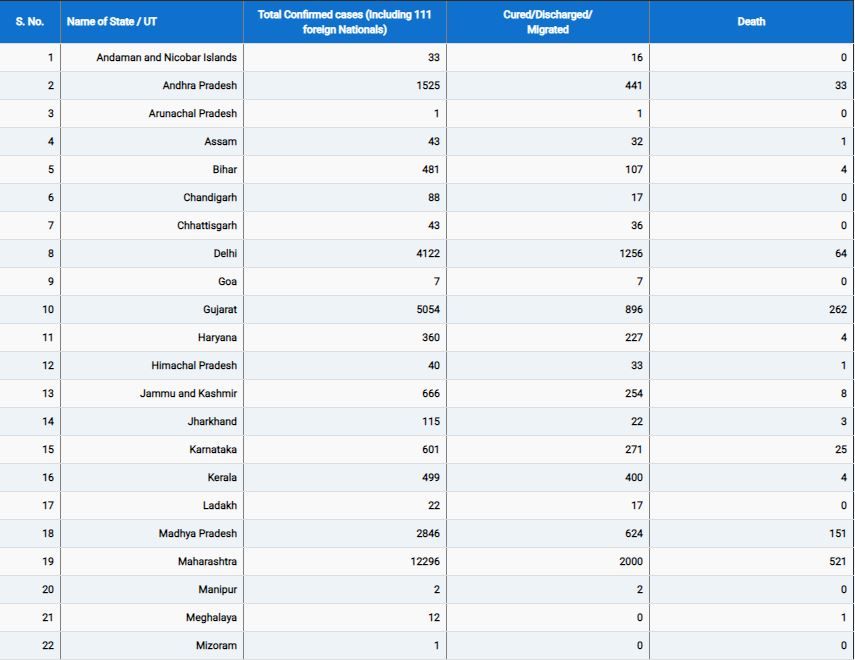 Of the 1301 deaths, Maharashtra tops the tally with 521 fatalities, followed by Gujarat at 262, Madhya Pradesh at 151, Delhi at 64, Rajasthan at 65, Andhra Pradesh at 33 and Telangana at 28. The death toll reached 43 in Uttar Pradesh, 29 in Tamil Nadu while Karnataka has reported 25 cases.

Prime Minister Narendra Modi on Saturday discussed ways to reform the agriculture sector and give a boost to marketing of the farm produce during his meetings with top ministers and government officials. Sources said discussions were also held for firming up plans for the second stimulus package for sectors impacted by the nationwide lockdown, which began on March 25 and has been extended till May 17 with some relaxations in the third phase beginning Monday.

Ever since its emergence in China last December, the novel coronavirus has killed nearly 2.4 lakh people worldwide and more than 33.5 lakh have been detected with the infection so far. Of these, more than 10 lakh have recovered too. The Indian Council of Medical Research (ICMR) is planning to study whether the novel coronavirus strain in India has undergone mutation while spreading within the country over the last two months.

After announcing the relaxations on Friday, the Union Home Ministry clarified that barbershops and salons will be allowed to open in green and orange zones, while the sale of non-essential items by e-commerce platforms will also be permitted in those areas. Liquor sales would be allowed in some 'red zone' areas too, subject to various conditions and the store being a 'stand-alone' one outside markets or malls.