Issuing a high alert in the state, the LDF government confirmed an outbreak of bird flu in certain parts of Kottayam and Alappuzha districts 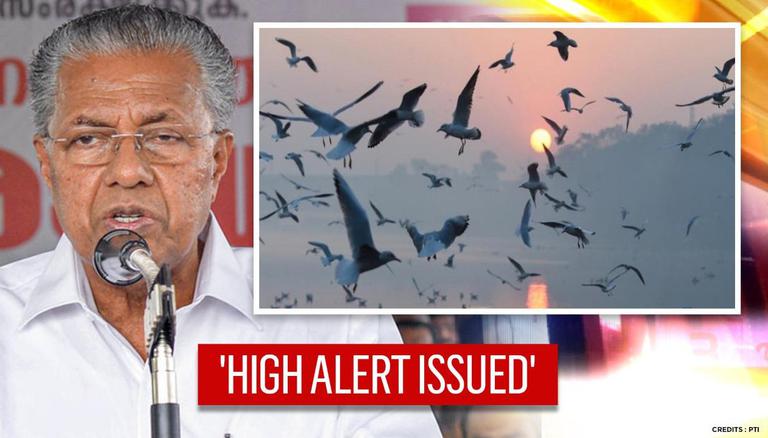 A day after announcing the culling of nearly 48,000 birds, the Pinarayi Vijayan government has now declared bird flu as a 'State-Specific Disaster' in Kerala. Issuing a high alert in the state, the LDF government confirmed an outbreak of bird flu in certain parts of Kottayam and Alappuzha districts. Cases of bird flu have been reported in Rajasthan, Madhya Pradesh and Himachal Pradesh as large flocks of birds have been found dead in several parts of the respective states.

Bird flu is declared as state-specific disaster in Kerala and high alert has been issued after an outbreak of bird flu was confirmed in certain parts of Kottayam and Alappuzha districts: Kerala Government

As per officials, on Monday, a total of 1,700 ducks died in the farm situated in Kottayam district. The state government has also decided to cull over 40,000 birds including ducks and hens with K Raju assuring compensation to the farmers. In Alappuzha, the collector has banned the use and trade of meat, eggs and waste of domestic birds, including ducks and chicken in Kuttanad and Karthikappalli Taluks.

After Rajasthan, Kerala and Madhya Pradesh, the northern State of Himachal Pradesh also reported cases of bird flu as officials confirmed that migratory birds found dead at Pong Dam Lake in Kangra district tested positive for the H5N8 virus. Around 1,800 migratory birds, most of them bar-headed geese, have been found dead in the Pong Dam Lake sanctuary in Himachal Pradesh. Following the case, Kangra District Magistrate Rakesh Prajapati has prohibited slaughtering, sale, purchase and export of any poultry, birds, fish of any breed and their related products, including eggs, meat, chicken, etc, in Fatehpur, Dehra, Jawali and Indora subdivisions of the district.

The flu was first witnessed in Rajasthan's Jhalawar district where nearly 50 crows within a kilometre dropped dead. The flu had forced authorities to impose Section 144 in the area while a Rapid Response Team was also deployed. Similar cases were reported in Jaipur and Jodhpur as well. After Rajasthan, authorities in Madhya Pradesh were alerted as carcasses of nearly 50 crows were found in Indore.

What is Avian Flu?

Avian influenza is the disease caused by infection from avian birds - Type A viruses. The viruses are common amongst aquatic birds worldwide and domestic poultry including certain animal species are extremely susceptible to the virus. Avian flu does not normally infect humans. However, sporadic infections with avian flu viruses have been reported in the past. The virus was first detected in 1996 in a Chinese goose and the first case of human infection was reported in 1997 in Hong Kong. Since then, cases of Avian Flu have been reported in more than 50 countries across Asia, Africa, Europe and the Middle East.