The curfew has been lifted in certain areas of Madhya Pradesh's Jabalpur on Monday while section 144 is still in force in isolated areas of the city.

Curfew has been lifted in certain areas of Madhya Pradesh's Jabalpur on Monday while section 144 is still in force in isolated areas of the city. The curfew was imposed on Friday after protesters resorted to violence in the area during demonstrations against the Citizenship (Amendment) Act. The decision was taken after a review of the situation in those areas, Superintendent of Police Amit Singh said.

The curfew was imposed on Friday in the areas falling under Gohalpur, Hanumantal, Kotwali, and Adhartal police stations after protesters pelted stones and clashed with the cops. However, section 144 is still in force in isolated areas of the city. 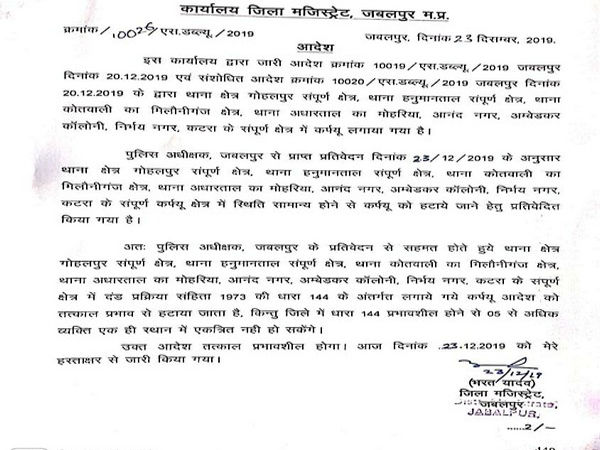 A number of anti-Citizenship Amendment Act (CAA) rallies are scheduled on Monday as the situation continues to remain tense across the country. While at least 18 people have died in Uttar Pradesh due to violence during protests, around a thousand have been arrested and many others booked. On Sunday, Prime Minister Narendra Modi tried to calm the situation by assuring that the CAA will not affect a single India citizen irrespective of religion. Despite PM Modi's message, however, protests continue across the country in full swing.

On Monday, Rahul Gandhi will lead one anti-CAA protest at Delhi's Rajghat while DMK organised another from CMDA office to Rajarathinam Stadium. Senior Congress leader Priyanka Gandhi Vadra confirmed that she will also be joining her brother Rahul Gandhi at 3 pm to protest against the Citizenship Amendment Act at Rajghat. Taking a dig at the ruling BJP, she urged people to stop the party from practicing 'divide and rule'. The CAA grants citizenship to refugees from Hindu, Christian, Sikh, Buddhist and Parsi communities fleeing religious persecution from Pakistan, Afghanistan, and Bangladesh, who arrived in India until December 31, 2014.

READ | Kanpur: Police Take Action Against Those Involved In Violence Over CAA