Manmohan Singh Writes A Letter To Uddhav Thackeray, Congratulating The CM Of Maharashtra

Dr. Manmohan Singh in a letter to Shiv Sena leader Uddhav Thackeray congratulated the new CM of Maharashtra on his oath-taking day. "I am very happy to know that you are taking oath as the 19th Chief Minister of Maharashtra. It is a historic event and I commend you on your visionary leadership," wrote Dr. Manmohan Singh.

Here is the former Prime Minister's letter to Maharashtra CM 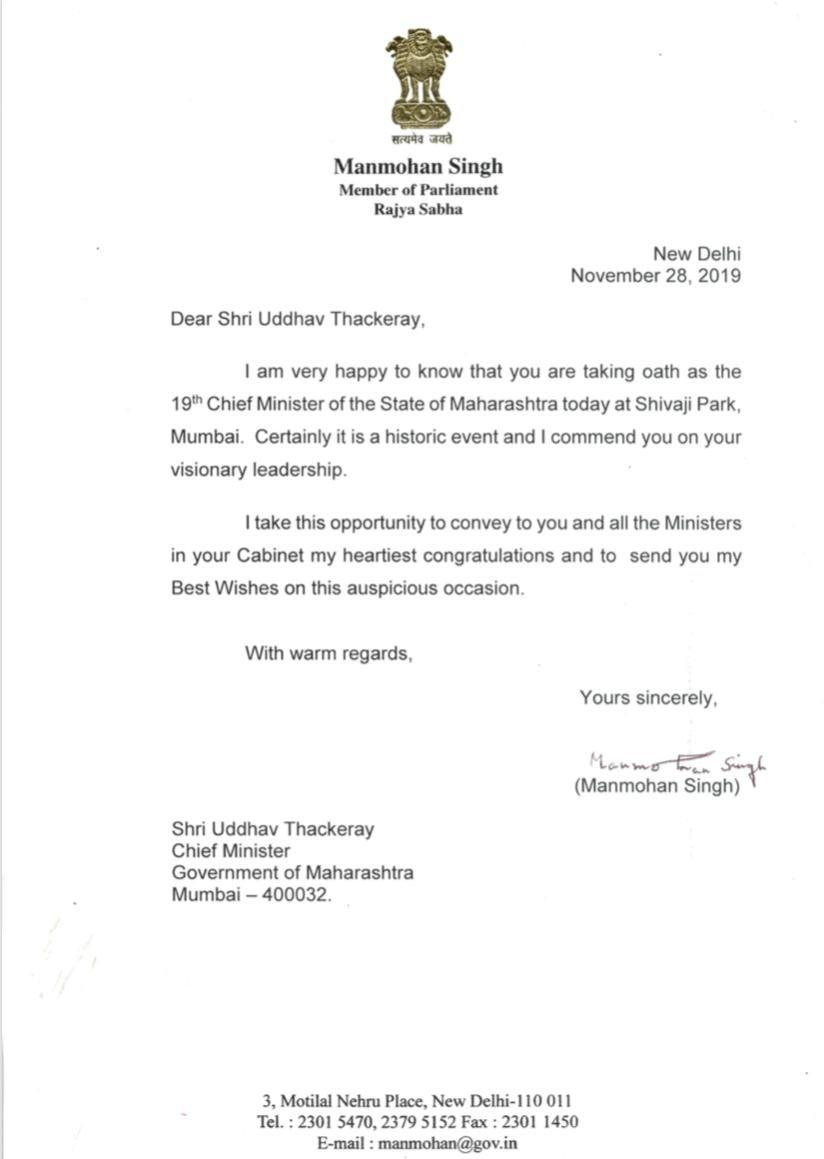 WATCH: These Are The Maharashtra Ministers Who Took Oath And Joined CM Uddhav Thackeray's Cabinet

Scripting a political history, Shiv Sena chief Uddhav Thackeray, the first from the family, took oath as the chief minister of Maharashtra at Shivaji Park on Thursday. Along with the Shiv Sena chief, two leaders each from NCP and Congress took oath as Maharashtra Ministers to join Uddhav Thackeray's cabinet. The ceremony took place in front of a thousand people in Mumbai and in the presence of prominent politicians from across parties including--NCP patron Sharad Pawar, MNS chief Raj Thackeray Madhya Pradesh CM Kamal Nath, DMK chief MK Stalin, and former CM Devendra Fadnavis. After an incessant phase of political chaos in Maharashtra, in an unconventional alliance between the Shiv Sena, NCP and Congress, Uddhav Thackeray was chosen as the leader of the Maha Vikas Aghadi.

READ: Uddhav Thackeray's Swearing-in: Leaders Who Attended The Ceremony And Who Missed It

Since none of the major political parties could garner enough numbers for government formation, President's Rule was imposed in Maharashtra on November 12. Hectic parlays had been going on in the NCP, Shiv Sena, and Congress camps to forge a post-poll alliance in the state. However, Ajit Pawar's decision to ally with the BJP to form the government on November 23 stumped the opposition.

On Monday evening, Shiv Sena, Congress, and NCP paraded its 162 MLAs in the Grand Hyatt hotel. After the Supreme Court ordered an immediate floor test on Wednesday, Ajit Pawar put in his papers. He was followed by Devendra Fadnavis who too announced his resignation. In the new Maha Vikas Aghadi government, while the Deputy CM will be from the NCP, the Speaker's post will go to Congress.