Ministry of Home Affairs (MHA), on Saturday has launched the National migrant Information System (NMIS)- based on the existing NDMA-GIS system to track migrants

In a major development, to streamline the movement of stranded migrants across the nation travelling via 'Shramik' trains and buses, the Ministry of Home Affairs (MHA), on Saturday has launched the National migrant Information System (NMIS)- based on the existing National disaster management authority (NDMA)'s GIS portal. The portal will maintain a central repository of the migrants travelling from one state to other and aid in contact tracing. As of date 1074 Shramik special trains have been operated ferrying more than 14 lakh workers. 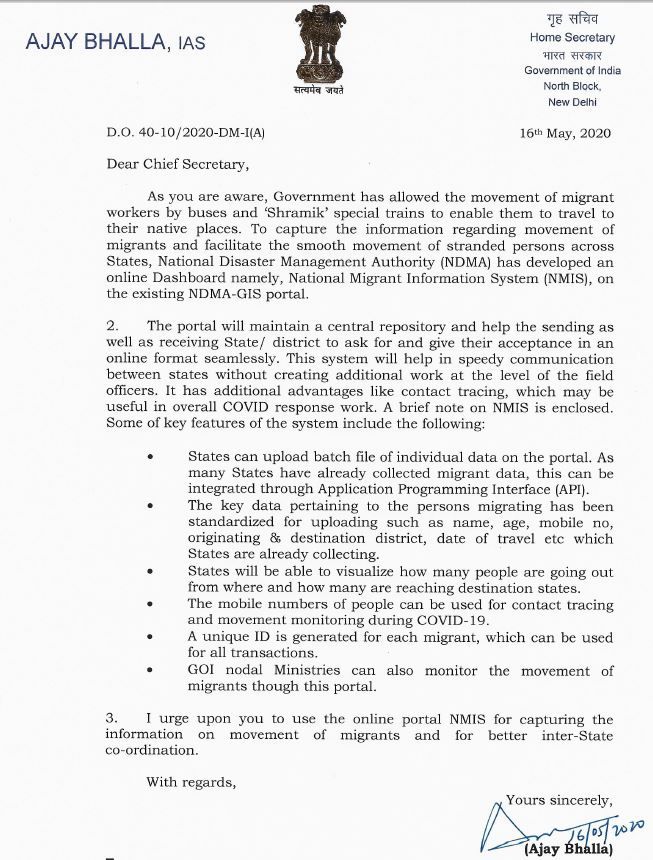 On May 1, the Ministry of Home Affairs allowed the movement of stranded migrants, pilgrims, tourists, students and other persons across India via special trains called 'Shramik trains' operated by the Ministry of Railways. On Thursday,  the Centre allowed states and Union Territories to hire private buses to ferry passengers who were arriving at railway stations via special 'Shramik' trains to their homes. The Centre has claimed that 85% of the fare cost was borne by Centre while 15% was borne by state governments.

After PM Modi had announced the first phase of lockdown, on March 28, thousands of migrant workers were seen thronging the Delhi-Uttar Pradesh border at Delhi's Anand Vihar Interstate Bus Terminal in the hope of reaching their homes, defying lockdown and creating a health hazard. Similarly, after PM Modi announced the extension of the lockdown till May 3, on April 14, around 2,000 migrant workers gathered at Bandra station, under the illusion of boarding 'Jansdharan Express' trains to UP, Bengal and Bihar. Apart from this several visuals have been seen of thousands of migrants walking across state borders to reach their native homes due to loss of income amid lockdown. Three notable accidents too have occurred killing 82 such on-foot travelling migrants.