NASA began the astronaut selection procedure for its first crewed space mission Project Mercury. The orbital flights were expected to commence in 1961.

On this day in history, January 27, 1959, the National Aeronautics and Space Administration (NASA) began the astronaut selection procedure for its first crewed space mission. NASA began screening over 508 military test pilots to shortlist at least 110 candidates for its Space Task Group (STG) for Project Mercury, the first manned space program. The orbital flights were expected to commence in 1961 to send the first human voyagers into space. Later in April, at a press conference in Washington, Glennan (NASA ADMINISTRATOR) introduced seven nominees to the public who would be called NASA "astronauts", as the pioneers of ballooning had been called "Argonauts", according to a release by NASA. The shortlisted pilots, Carpenter, Cooper, Glenn, Grissom, Schirra, Shepard, and Slayton were given NASA uniforms and the preflight mission assignments.

The public information officer for NACA, later Glennan’s adviser, laid the guidelines for public affairs policy that would govern the manned mission and the astronauts. The astronaut selection procedure was done from at least 508 service records which were screened in January 1959 by Stanley C. White, Robert B. Voas, and William S. Augerson at the military personnel bureaus in Washington, according to NASA’s release on Project Mercury. Of the total, as many as 110 military men met the minimum requirement which included five Marines, 47 Navy men, and 58 Air Force pilots. NASA’s evaluation committee began screening dozens of Army pilots' records on this day in history that could have had a possibility to accompany the manned Redstone flights for NASA planned for late 1959. 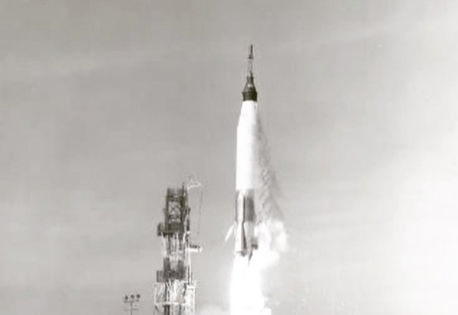 [John Glenn is the first US man to orbit the Earth as part of Project Mercury.  Credit: Twitter/@Heauxno1currr] “Assistant Director of STG, Charles J. Donlan, decided to divide the list of 110 arbitrarily into three groups and to issue invitations for the first group of 35 to come to Washington at the beginning of February for briefings and interviews,” NASA informed in the statement.

Have you ever wondered what is in the Mercury 7 Monument Time Capsule? The stainless steel capsule is intended to be opened in 2464 and contains documentation of the Project Mercury human spaceflight program. The complete list can be seen below. pic.twitter.com/4DPQFCATW8

NASA’s evaluation committee interviewed the first 24 shortlisted military personnel by January end, and the first 10 men that were interrogated on February 2 agreed to the elimination procedures unanimously. As many as sixty-nine pilot-candidates arrived in Washington in February in two groups, of which six were too tall for the mission. Fifty-six pilots qualified for the written tests, technical interviews, psychiatric interviews, and medical history reviews.

“During the briefings and interviews, it became apparent that the final number of pilots should be smaller than the twelve originally planned for. The high rate of interest in the project indicates that few, if any, of the men will drop out during the training program," George Low from NASA said in the release.

He added, "It would, therefore, not be fair to the men to carry along some who would not be able to participate in the flight program. Consequently, a recommendation has been made to name only six finalists."

Astronauts brought to House Committee on Science and Astronautics

In the third phase, over 30 different laboratory tests collected chemical, encephalographic, and cardiographic data for the shortlisted candidates, of which 32 were found to have a medical problem. During March, 13 psychological tests for personality and motivation were conducted by the space agency and dozens were eliminated. In phase five, and the final evaluation of the technical qualifications, of the total 18 finalists, the final list was prepared.  On May 28, 1959, the astronauts were brought before the House Committee on Science and Astronautics and the first seven American astronauts were chosen for the manned mission Project Mercury. “How could anyone turn down a chance to be a part of something like this?” The selected astronauts told a press briefing.