'No Need Of A Reminder Of Our Incompetence': CPI(M) Neta On Pulwama Attack Anniversary

Insulting the martyrs of Pulwama terror attack, CPI-M's Mohd Salim in a shocking remark said, "We don't need a memorial to remind us of our incompetence."

A memorial to the 40 CRPF personnel killed in the Pulwama terror attack in February last year will be inaugurated at the Lethpora camp on Friday, February 14. Insulting the martyrs, CPI-M leader Mohammad Salim in a shocking statement stated that "We don't need a memorial to remind us of our incompetence."

'How 80kg of RDX got past international borders?'

Salim took to Twitter to question the armed forces and wrote, "The only thing we need to know is how 80kg of RDX got past the international borders to the 'most militarized zone on earth' & exploded in Pulwama." He added that "justice" for Pulwama attack needs to be done. 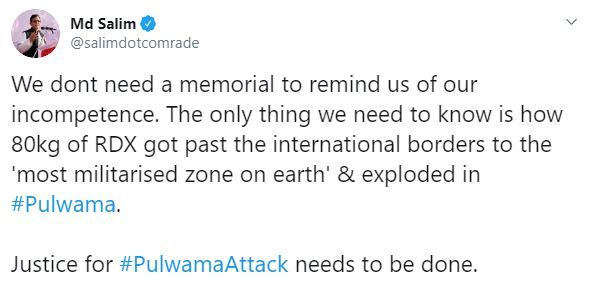 'It is a way to pay homage to the brave jawans'

Speaking about the memorial, Additional Director General of CRPF Zulfiquar Hasan on Thursday said, “It is a way to pay homage to the brave jawans who lost their lives in the attack,” The names of all the 40 personnel along with their pictures will be part of the memorial along with the motto of the Central Reserve Police Force (CRPF) -- ‘Seva and Nishtha’ (Service and Loyalty).

“It definitely was an unfortunate incident and we have learnt our lessons now. We were always extra alert during our movement but now an extra layer of alertness has been added to it,” Hasan told PTI in Srinagar.

Amit Shah and Rajnath Singh pay tributes to the martyrs

As India marks the first anniversary of the Pulwama attack on Friday, Defence Minister Rajnath Singh and Home Minister Amit Shah paid tributes to the martyrs.

Remembering the fallen @crpfindia personnel who were martyred during the dastardly attack in Pulwama(J&K) on this day in 2019.

India will never forget their sacrifice. Entire nation stands united against terrorism and we are committed to continue our fight against this menace.

I pay homage to the martyrs of Pulwama attack.

India will forever be grateful of our bravehearts and their families who made supreme sacrifice for the sovereignty and integrity of our motherland.

Around 40 CRPF personnel were killed when their convoy was targeted by a suicide bomber of Pakistan-backed Jaish-e-Mohammad in Pulwama district of Jammu and Kashmir on February 14, 2019. Tensions flared up between India and Pakistan after the attack. Leaders across party lines condemned the attack and called for an appropriate response.

READ | 'Did not forget, did not forgive': CRPF 'salutes' martyrs of Pulwama terror attack