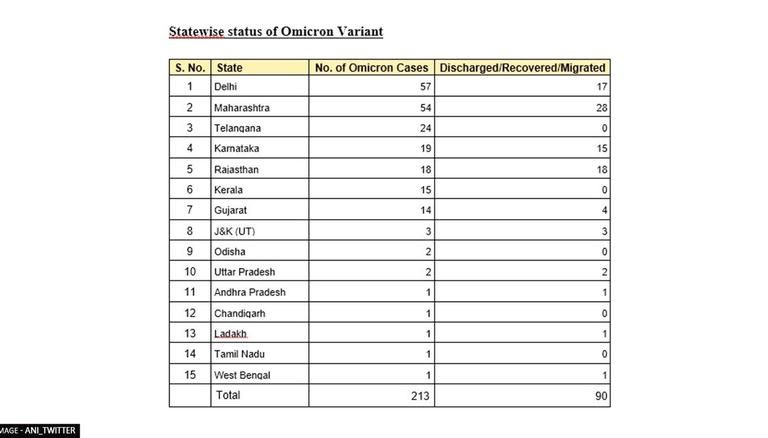 
In Maharashtra, RT-PCR testing found ten people to be COVID positive, including eight police officers, before the beginning of the State Assembly's Winter Session. According to the State Health Department, about 3,500 samples were tested. On Tuesday, December 21, Maharashtra reported 825 new Coronavirus infections. On Monday, December 20, the state recorded 544 new Coronavirus infections but, no Omicron cases, as well as four deaths, the lowest number since April 1, 2020.

In the state, the case fatality rate is 2.12 %. Since Monday evening, over 1,11,385 tests have been performed, bringing the total number of Coronavirus samples analysed to 6,78,83,061. Currently, 73,053 people are quarantined at home, while 864 people are quarantined in institutions. The total number of cases recovered was 64,98,807.  The Mumbai area reported the most number of new cases (421), followed by 233 in Pune and 99 in Nashik, among Maharashtra's eight administrative regions (each consisting of a group of districts).

The regions of Aurangabad, Kolhapur, Latur, Nagpur, and Akola each reported 13, 26, 10, 16, and seven new cases. There were seven fatalities in the Pune region and four in the Mumbai region. Each of the regions of Akola, Kolhapur, and Nashik had one death. There were no new deaths reported in the Nagpur, Latur, or Aurangabad regions. The total number of Omicron cases in India has risen to 213, with Delhi and Maharashtra topping the list with 57 and 54, respectively. According to the latest data from the Union Health Ministry, 90 of the total 213 patients have been discharged after recovering. Omicron has been detected in Maharashtra (54), Telangana (24), Karnataka (19), Rajasthan (18), Kerala (15), and Gujarat (14).

Meanwhile, according to data from the Ministry of Health and Family Welfare, the country reported 6,317 new COVID-19 cases, 318 fatalities, and 6,906 recoveries in the last 24 hours. The active caseload in India now amounts to 78,190. It's the lowest it's been in 575 days. In response to an increase in instances of the Omicron variant in various regions of the country, the Centre requested states to impose night curfews and closely supervise mass gatherings on Tuesday. On Tuesday, Union Health Minister Mansukh Mandaviya told the Rajya Sabha that there is no evidence that existing vaccines do not work on the Omicron variant of Coronavirus. Mandaviya, in a written response to the upper house, clarified that vaccination efficacy could be harmed as a result of a mutation in the virus's spike gene.