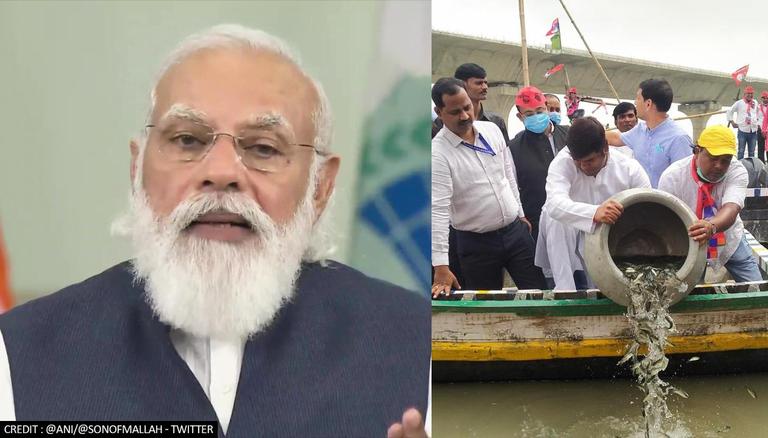 
Marking PM Modi's 71st birthday, Bihar Minister Mukesh Sahani on Friday, released 71 thousand fishes into the Ganga river in Bihar. Taking to Twitter, Sahani shared the photo of the event, stating that the act would rejuvenate the mighty river. Sahani - whose Vikassheel Insan party (VIP) is a BJP ally in Bihar - had recently raised eyebrows when it announced that it will contest in 165 seats in UP state polls, countering the ruling BJP which eyes a consecutive term for Yogi Adityanath.

Recently, Sahani ran into trouble when VIP planned to install 18-foot Phoolan Devi statues at districts like Prayagraj, Ayodhya, Gorakhpur, Auraiya, Lucknow, Jaunpur, Mirzapur, Maharajganj in private lands to mark  her 20th death anniversary and hold a garlanding ceremony. Throwing a damper to the event, police officials seized the statues citing that the party did not have permission to install the statues or hold the ceremony. It also stopped Sahani from entering UP, enraging VIP which said, "We want to tell the govt VIP is here and is to stay", terming BJP 'casteist'. Sahani, who is currently a part of the Nitish Kumar govt, has also been needling the BJP meeting Bihar Opposition leaders - Chirag Paswan, Lalu Yadav.

READ | PM Narendra Modi's 71st birthday: A look back at his governance initiatives

Entering his septuagenarian years, PM Modi - born in 1950 - turns 71 on September 17 as he completes 20 years in public service. To mark this occasion, BJP has kicked off its grand 'Seva Aur Samarpan Abhiyan' which will last for 20 days. As part of the campaign, the BJP workers will carry out a massive cleanliness drive on October 2, encourage public to use Khadi and local products.

The party has arranged five crore postcards to be delivered from the BJP booth workers across the country to PM Modi, committing themselves to public service.  The party has also urged its workers to publicise the auctions of gifts received by PM Modi on his birthday. The auction for the same will be held on 'pmmemontos.gov.in.' and the funds generated from the auction would further be utilised in the Namami Gange project.