Dr. Shabista Khan has written to the Allahabad HC Chief Justice Govind Mathur requesting protection for her husband Dr. Kafeel Khan, who is in Mathura jail.

In a significant development, Dr. Shabista Khan has written to the Allahabad High Court Chief Justice Govind Mathur requesting protection for her husband Dr. Kafeel Khan, who is currently lodged in Mathura jail. In a letter dated February 25, Dr. Khan highlighted that charges under the National Security Act were slapped against her husband. Alleging that custodial deaths were common in the jails of Uttar Pradesh, she claimed that Dr. Kafeel Khan could be murdered inside Mathura jail as he was being incessantly harassed.

Finally, she urged the Chief Justice to direct the jail authorities to provide him security. Speaking to ANI on Sunday, she revealed that Dr. Kafeel Khan was not given food for 5 consecutive days when he was brought to Mathura jail. Moreover, he is allegedly being kept in a small barrack with 100-150 people.

Dr. Shabista Khan wrote, “He was illegally kept in detention violating the order of the court and after one day of inquiry, NSA charges were slapped against him. My husband is being harassed in the district jail to an unprecedented extent. Nowadays, custodial death has become common in the jails of Uttar Pradesh. His death can be carried out inside the jail. And the jail administration will shake off its responsibility by blaming an innocent prisoner for the crime. All the above things have been told to me by my husband. In this situation, it will be prudent to keep him away from hard-core criminals apart and granting him protection in the jail.” 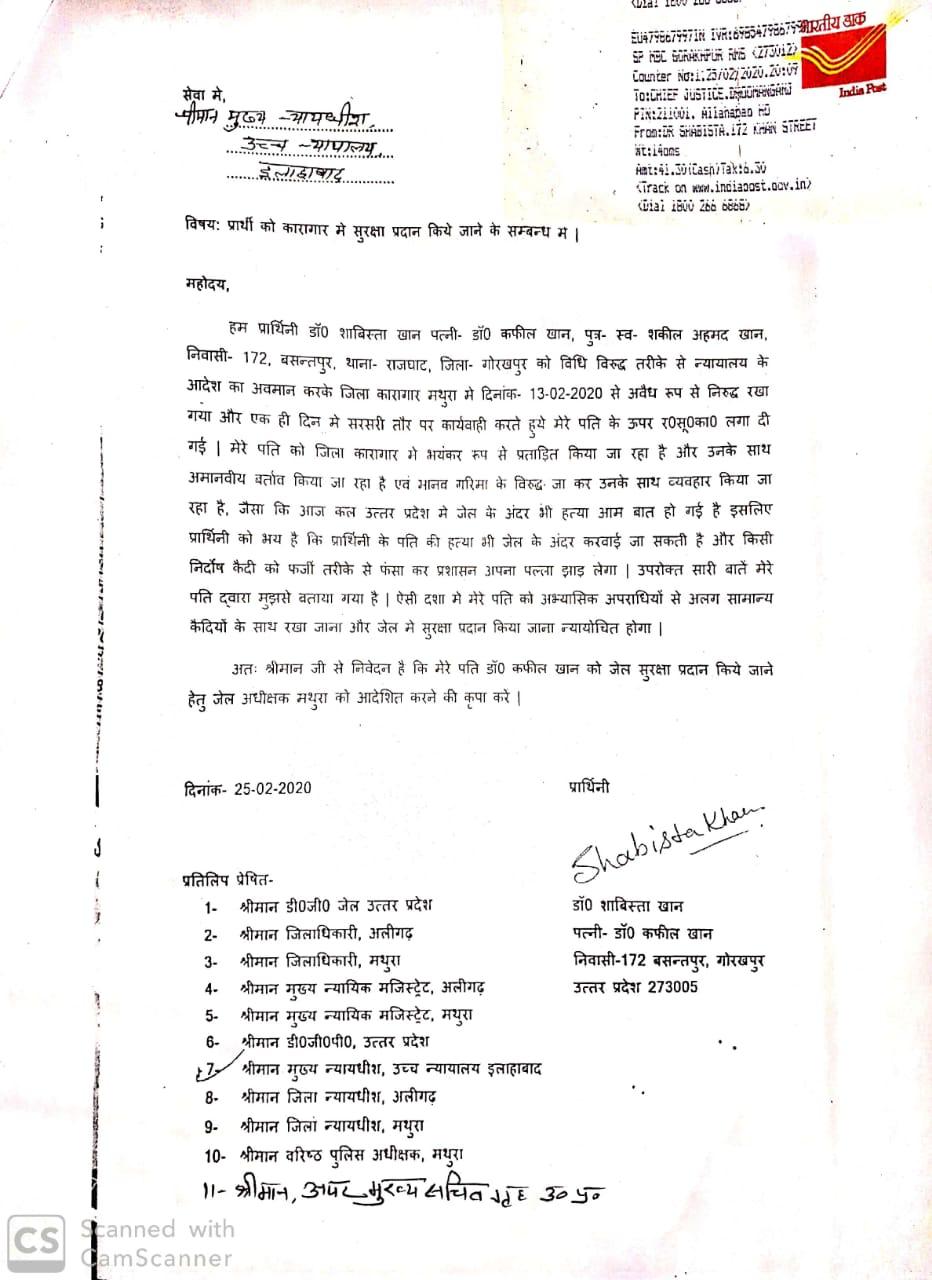 She told ANI, "We went to meet him in Mathura jail. He told me that when he was brought to the jail after being arrested, he was not given food for five days straight. The barrack he is staying in is very small and around 100-150 people have been lodged there. His life might be in danger there.”

Dr. Kafeel Khan was arrested by the UP Special Task Force from Mumbai on January 29 for allegedly giving a provocative speech at the open talk in the Aligarh Muslim University on December 13, 2019. As per the police FIR, he reportedly stated that the BJP leadership was teaching everyone to adhere to their religion first, rather than becoming good human beings. Alleging that the Citizenship Amendment Bill rendered Muslims as second-class citizens, he purportedly claimed that they would be harassed after the implementation of the National Register of Citizens.

After being taken to Aligarh, he was sent to Mathura jail. Despite being granted bail by the Chief Judicial Magistrate court in Aligarh, Dr. Kafeel Khan’s release from the jail was delayed. Subsequently, he continued to languish in prison as NSA charges were slapped against him.