Speaking exclusively to Republic, Meenakshi, the wife of late Rahul Bhat, said the terrorists were cowards and dared them to fight with the armed forces. 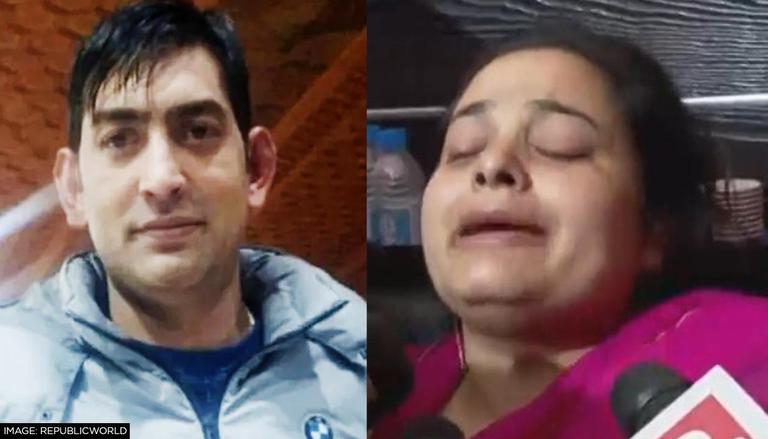 Rahul Bhat’s widow slammed the terrorists who killed her husband. Speaking exclusively to Republic, Meenakshi said the terrorists were cowards and dared them to fight with the armed forces. In a message to terrorists, she said, “Terrorists are cowards. They attacked unarmed men who were in Kashmir.”

She further mentioned the killing of Ranjit Singh and said that the terrorists killed an unarmed man who had four daughters. “Come kill me. You just want to kill people. If you dare, fight with our forces,” she said in a message to terrorists.

She further accused Pakistan of “giving them (terrorists) bullets” to kill people. “Those who killed him are cowards,” Bhat asserted.

Speaking exclusively to Republic, Meenakshi Bhat said that her husband Rahul Bhat was targeted by the attackers. She accused ‘own people’ of a conspiracy behind the killing. “Our own people ditched us. Otherwise, how would they (terrorists) come to know that he is alone. Where were other people at that time? He didn’t know about the conspiracy against him,” Meenakshi said.

“People used to say that he is their brother and no one will harm him. Why people didn’t come after hearing first shot? All were hand in glove,” the slain pandit’s wife said while alleging a conspiracy in the matter.

“I demand NIA investigation so that they don’t hatch conspiracy again. Our own people backstabbed us,” she said.

Meenakshi further said that the Rahul attained martyrdom by being killed by the terrorists.

'Send us to the forest but not here'

Speaking about the ongoing protest by Kashmiri Pandits in Kashmir, Meenakshi said that the people of J&K couldn’t be assured security. “You cannot provide security to people here. They (terrorists) have threatened no matter how much security we keep, they will kill us. Do we look like scapegoats? Send us to the forest but not here. No one is safe till terrorism is alive,” she added.

“People there say, our children too will become like Gungun (daughter of Rahul Bhat),” Meenakshi added.

“She knows her father is gone. She doesn’t say anything now, I can’t even cry before her. She hears that she will lose her mother too. What happened to my daughter, shouldn’t happen to anyone else,” Meenakshi further said while speaking about her daughter.

'I wouldn’t have accepted the job': Meenakshi Bhat

“I need to make savings to take care of her. Rs 5 lakh is nothing in today’s time. They are giving 05-05 lakh and getting people killed. Stop this and give job here in safe location,” Meenakshi said while reacting to the administration’s financial assistance to the family. The appointment letter was handed to the family on Wednesday on compassionate grounds as Rahul Bhat was shot dead by terrorists in Jammu and Kashmir’s Budgam district.