Union Minister Smriti Irani recently shared a meme on her Instagram account about jumping to conclusions that almost everyone can relate to.

Union Minister Smriti Irani recently shared a meme on her Instagram about jumping to conclusions that almost anyone can relate to. Smiriti Irani is quite popular on social media owing to her relatable posts about everyday life. From sharing adorable throwback pictures to memes and songs in her playlist, her Instagram account always keeps her fans entertained.

The most recent meme shared by Smiriti Irani is an adorable doodle about how everyone jumps to conclusions. She shared the meme accompanied by a laughing emoji. 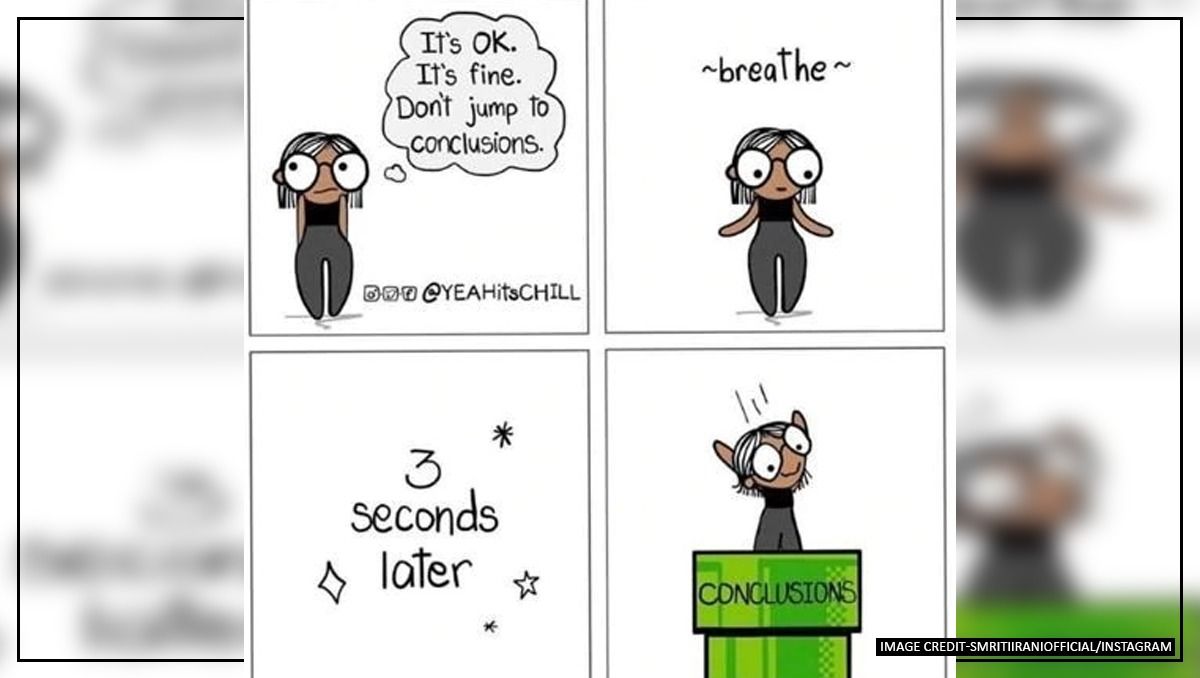 The meme is a common four-panel doodle and starts off by showing us a caricature girl who tells herself that everything is fine and she should not jump to conclusions. The second panel shows her taking some deep breathes to calm herself down. The third panel shows that 3 seconds have passed and then the fourth panel has the girl jumping feet first into a pipe from the classic Mario games with the word 'conclusions' written on it.

Read: UP: FIR Filed Over Alleged Illegal Use Of Smiri Irani's Picture By Developer

Meanwhile, the awkward placement of Trump’s hand on Prime Minister’s shoulder while PM Modi welcomed the latter on February 24 inspired several memes and an Indian comedian, who goes by the Instagram username @OyeAnkit, shared a version on Instagram. He even tagged Union Minister Smriti Irani with the caption “Rishton ke bhi roop badalte hain ”.

The spontaneous reply left everyone including the comedian stunned. Many users also lauded her for her reply. One user wrote, "Happiness is electing such a savage leader." While another commented, " Smriti Ma’am be like: Chhota aadmi gundai kar rha hai, karne do.” Yet another user commented, "Sarcasm koot koot k bhara h aapke andar ma'am , because saas bhi kabhi bahuu thi''.