At least 12 pilgrims lost their lives, and several were injured in a stampede, triggered by a heavy rush of devotees at the Mata Vaishno Devi shrine in Katra, J&K. Rescue ops underway 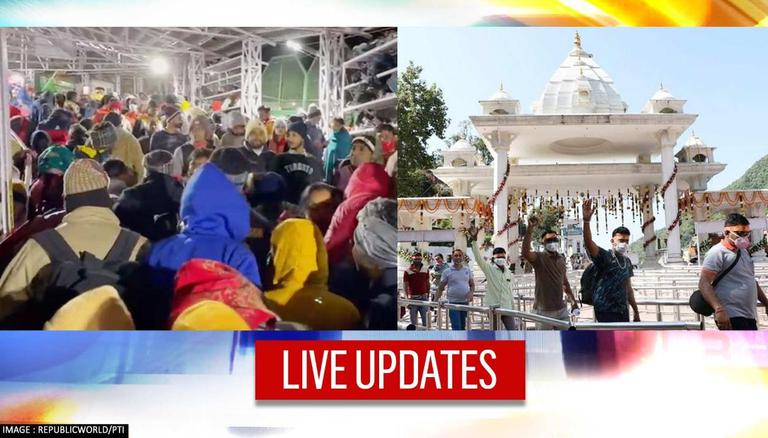 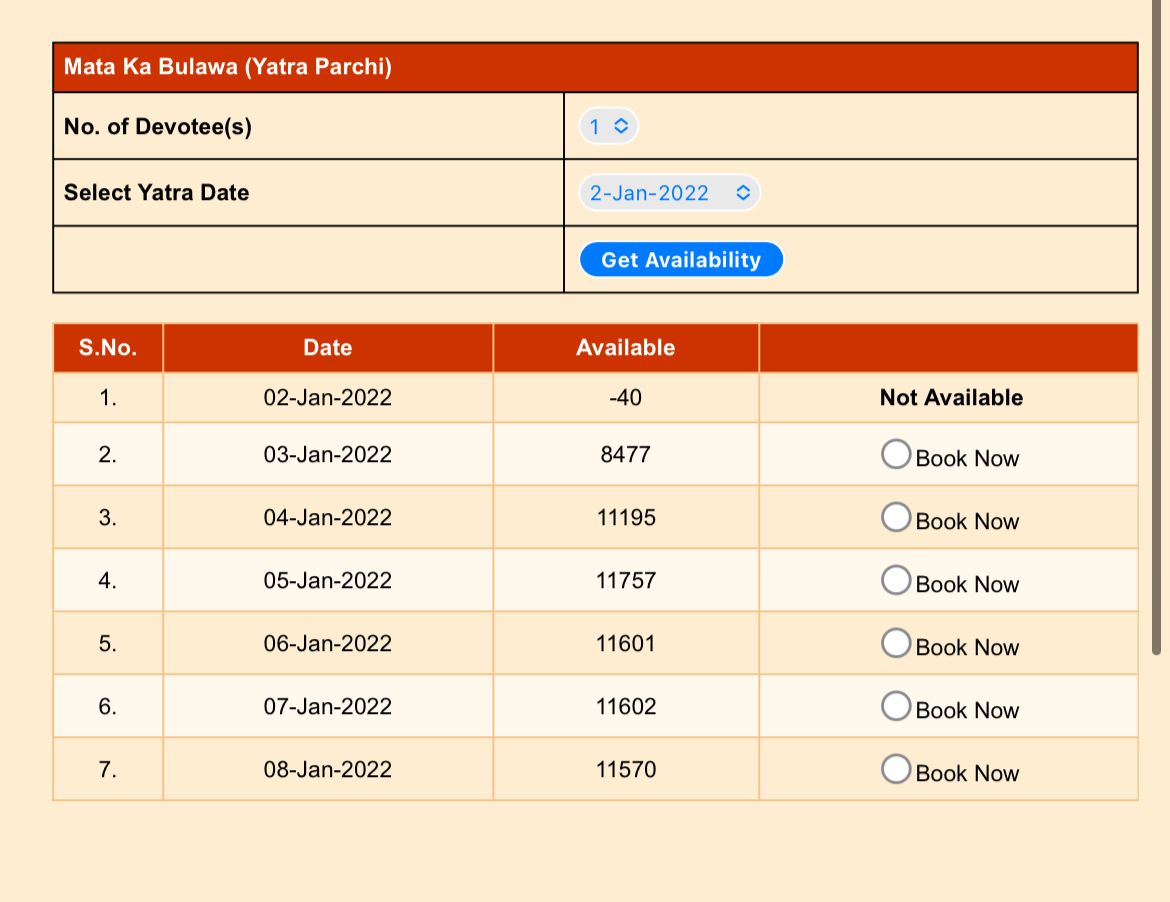 Stampede at Vaisho Devi happened because of "scuffle between two groups", the Vaishno Devi Shrine Board said in a statement. Only 35,000 pilgrims allowed to proceed for yatra between Dec 31 and Jan 1 against capacity of 50,000, it added.

19:41 IST, January 1st 2022
Three-member panel to submit its report on Vaishno Devi stampede within a week

The three-member panel set up to probe the stampede at the famous Vaishno Devi shrine has been asked to submit its report to the Jammu and Kashmir government within a week, according to an official order issued on Saturday. The committee headed by the principal secretary (home) was constituted by the Lt Governor Manoj Sinha following the stampede at the shrine atop Trikuta hills in Reasi district in the early hours of Saturday that left 12 pilgrims dead and over a dozen others injured. In a tragic incident, 16 individuals lost their lives and 20 got injured in a stampede in Vaishno Devi temple in Jammu and Kashmir on Saturday. As authorities gained control and managed the situation on the ground, the Yatra has been resumed afterwards. Republic Media Network spoke with the injured individuals who have witnessed the stampede while coming downhill after paying their obeisances at the temple.

Union Minister Jitendra Singh inspects Vaishno Devi Bhawan stampede site with DGP Dilbag Singh in Katra. "We'll now hold discussions in Katra with the Vaishno Devi trust officials. We have to limit the number of devotees going for the yatra & ask them to cooperate," he says.

J&K LG Manoj Sinha speaks to Republic, says "12 devotees dead, 16 admitted in hospital, 9 discharged.  Few are in ventilation but the doctor is saying they will be fine soon. After investigation, we can talk further. Had a word with PM Modi on the rescue operation." Divisional Commissioner, Jammu, Raghav Langer said the bodies of four victims of the stampede were dispatched to their native places, while the process to send the rest of the bodies was in progress.

Langer, along with Additional Director General of Police (ADGP) Mukesh Singh, visited Katra the base camp for pilgrims visiting the Vaishno Devi shrine  to take stock of the situation.

Langer and Singh are part of a high-level committee formed under instructions of Jammu and Kashmir Lieutenant Governor (L-G) Manoj Sinha and headed by the principal secretary (home) to inquire into the stampede at the shrine.

The Vaishno Devi pilgrimage is going on smoothly with strict adherence to standard operating procedures (SOPs), including COVID-19 guidelines, despite a stampede that claimed 12 lives and left over a dozen injured, a senior government official said on Saturday.

Dr. JP Singh - Doctor at Narayana Super Speciality Hospital who treated injured, spoke to Republic TV on the incident. He said, "Unfortunate incident, first information of casualty came at 2:30 AM. Entire consultant team of emergency was ready to see patients. 16 injured patients were received and 6 are discharged. Luckily,  CT scans are normal. Rest of the injured patients too will be discharged soon".

Four of the 15 pilgrims who suffered injuries in a stampede at Shri Vaishno Devi Shrine have been discharged from the hospital after treatment, officials said on Saturday. The treatment of 11 others is underway.

Deeply saddened by the news from #matavaishnodevi. My condolences to the families of all those who lost their lives in the stampede & prayers for the quick & complete recovery of all those injured.

Such mismanagement has been unheard of in recent times.

Our heartfelt condolences go out to the families who lost their loved ones & pray for speedy recovery of the injured. https://t.co/2TSmSjqaXc

Extremely bad news coming in from Vaishno Devi. About 12 people killed in stampeded. My humble thoughts and prayers with the families of those who lost their lives.

GOI trumpets scrapping Article 370 & dismembering J&K throughout the country but is deeply paranoid & intolerant when people of J&K want to protest against its disempowerment. For the umpteenth time, we’ve been placed under house arrest for trying to organise a peaceful protest

My profound condolences to the bereaved families who lost their dear ones in a stampede at #matavaishnodevi shrine. I pray for a speedy and complete recovery of those injured.

Spoke to Hon'ble Home Minister Shri Amit Shah Ji. Briefed him about the incident. A high-level inquiry has been ordered into today's stampede. The Inquiry Committee will be headed by Principal Secretary (Home) with ADGP, Jammu and Divisional Commissioner, Jammu as members: J&K L-G

Ex-gratia of Rs.10 lakh each would be given to the next of kin of those who lost their lives due to stampede and Rs.2 lakh to injured. Shrine board to bear the cost of treatment of injured: Office of L-G J&K

I’m immediately rushing to #Katra to take stock of the situation arising out of the tragedy at Mata #VaishnoDevi Shrine. I look forward to have a detailed discussion with the administration and report it back to Hon’ble PM Sh @NarendraModi.

The tragedy due to a stampede at Mata Vaishno Bhawan is heart-wrenching. Anguished by the loss of lives due to it. My condolences to the bereaved families in this sad hour. Praying for the speedy recovery of the injured.

Deeply pained at the loss of lives due to stampede at Shri Mata Vaishno Devi Shrine. My condolences to the families of the deceased & prayers with the injured.

Deeply saddened to hear about the accident that took place at Mata Vaishno Devi at Jammu.

May God grant peace to the departed souls and I pray for speedy recovery of the injured. My condolences to the bereaved families.

We are ready to help in any way possible.

Very distressed to know that an unfortunate stampede claimed lives of devotees at Mata Vaishno Devi Bhavan. My heartfelt condolences to the bereaved families. I wish speedy recovery to those injured.

Extremely saddened by the loss of lives due to a stampede at Mata Vaishno Devi Bhawan. Condolences to the bereaved families. May the injured recover soon. Spoke to JK LG Shri @manojsinha_ Ji, Ministers Shri @DrJitendraSingh Ji, @nityanandraibjp Ji and took stock of the situation.

In an unfortunate incident reported on New Year's eve, at least 12 pilgrims lost their lives, and several were injured in a stampede, triggered by a heavy rush of devotees at the famous Mata Vaishno Devi shrine atop Trikuta hills in Jammu and Kashmir. The stampede occurred shortly after midnight and the injured persons were rushed to the hospital, officials said on Saturday.

Hospital and police sources had earlier said at least 20 people were injured in the stampede and were taken to hospitals, including Mata Vaishno Devi Narayana Superspeciality hospital, and the condition of some of the injured was stated to be “serious”.

Talking about the death toll, Dr. Gopal Dutt, Block Medical Officer, Community Health Centre had earlier informed that 6 pilgrims have died. However, 12 bodies were recovered by morning, he said. "Six dead in the stampede at  Mata Vaishno Devi Bhawan, the exact number not there yet. Their post mortem will be done. Injured being taken to Naraina hospital, the total number of injured not confirmed either." Rescue operations are still underway. The yatra which was briefly halted has now resumed.