With the gradual increase in number of trains, Ministry of Railways on Wednesday, allowed the opening of station catering/vending units.

With the gradual increase in number of trains, Ministry of Railways on Wednesday, allowed the opening of station catering/vending units. It added that the zonal railways and IRCTC must take necessary action for opening all static catering and vending units, with immediate effect. Moreover, in refreshment rooms and food plaza, food stalls can serve cooked food for takeaway purposes only. 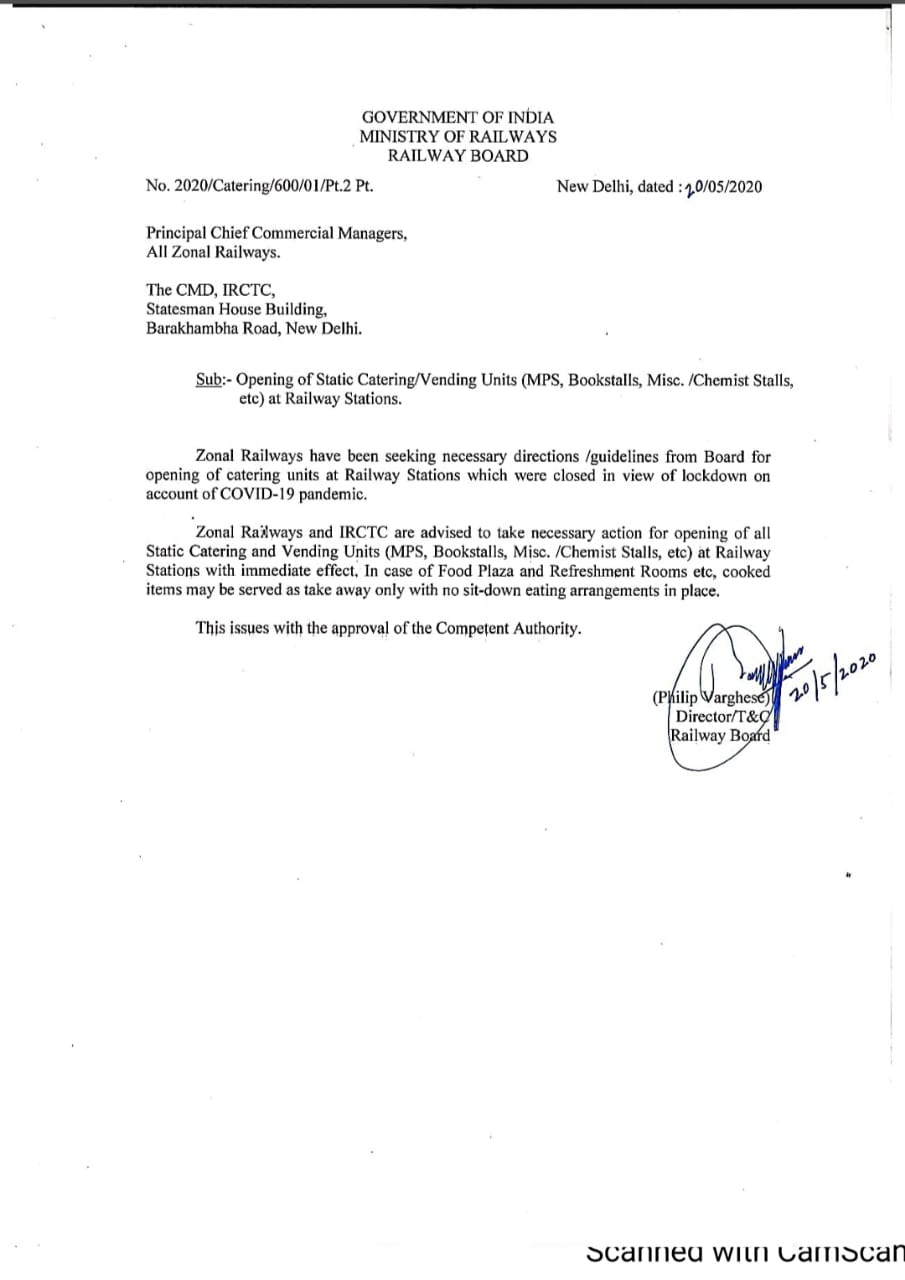 On Tuesday, Railways Minister Piyush Goyal announced that 200 non-AC trains shall start running daily from June 1 onwards. Apart from this, the Union Minister added that the Railways shall augment the number of Shramik Special trains from the current capacity of 200 per day. He called upon the state governments to help the migrant workers by registering them at the nearest mainline station and providing the list to the Railways.

Moreover, the Centre also issued a new order empowering the Ministry of Railways and Ministry of Home Affairs to decide on the movement of Shramik trains. According to the revised Standard Operating Procedure (SOP), the consent of receiving states is no longer necessary. This move was reportedly necessitated after several states blamed each other for not accepting Shramik train requests.

Similarly, Centre has had a tussle with several states over Shramik trains- especially non-BJP ruled states. Goyal, notably has attacked West Bengal CM Mamata Banerjee who has allowed only 9 trains till date to Bengal from other states. He claimed that Bengal government was playing a cruel joke on migrants as 105 trains were needed to rum from other states to Bengal, daily.

The Centre flagged Shramik trains across the nation on May 1 to transport stranded migrants to their home states. As of Tuesday, Railways had run 1595 trains and transported 21 lakh migrants back home and plans to run trains from every district. The Centre has also allowed states to ply buses to transport stranded migrants and also announced 15 special trains for other passengers wishing to travel back home. India's current COVID-19 tally stands at 106750 cases with 3303 fatalities and 42298 fatalities.

Coronavirus Live Updates: Domestic flights to resume from May 25 as cases soar to 1,06,750

PEOPLE HAVE PLEDGED SO FAR
LATEST NEWS
View all
2 weeks ago
Delhi to Patna train route, timetable & booking details for the special trains
2 weeks ago
Delhi to Chennai train route, special train timetable, and important details from SOP
1 week ago
What is 2S in train booking? Things to know before initiating your IRCTC train booking
1 week ago
First Shramik Special train from Bengal leaves for Rajasthan
2 weeks ago
How to reach railway station in lockdown? See the modes of transport to use in lockdown