In a massive revelation, Republic on Monday has accessed letters written by Congress leaders Priyanka Gandhi Vadra and Milind Deora to Yes Bank founder Rana Kapoor in 2010 facilitating the purchase of a painting of late former PM Rajiv Gandhi by artist M F Hussain. Deora in his letter writes to Kapoor addressing him as 'Rana Uncle' to contact Vadra to initiate the purchase. Republic has accessed a cheque issued by Kapoor to Vadra for Rs 2 crores, for purchasing the above-mentioned painting.

Moreover in the letter written by Vadra to Kapoor thanking him for the purchase of the painting gifted to her father by Hussain in 1985 during the Congress party's centenary celebrations. In the letter which was signed by Vadra, she stated that the painting was in her possession and acknowledged the payment of  Rs 2 crores to the account mentioned in the cheque. Sources have alleged that the painting was the property of the Congress party and not Priyanka Gandhi Vadra's property and there is allegedly no certificate obtained from an expert for this painting in particular that he bought from Priyanka Gandhi Vadra. 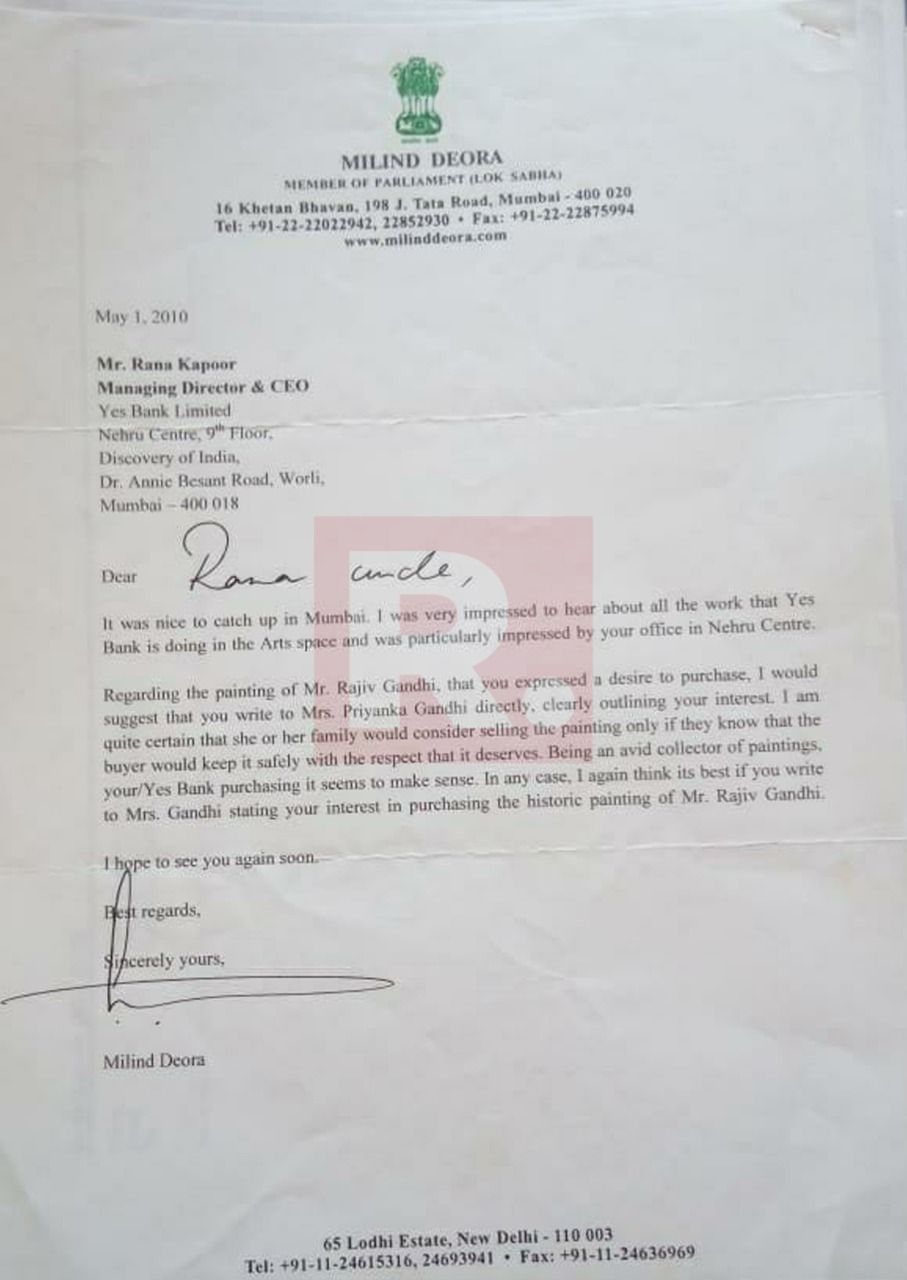 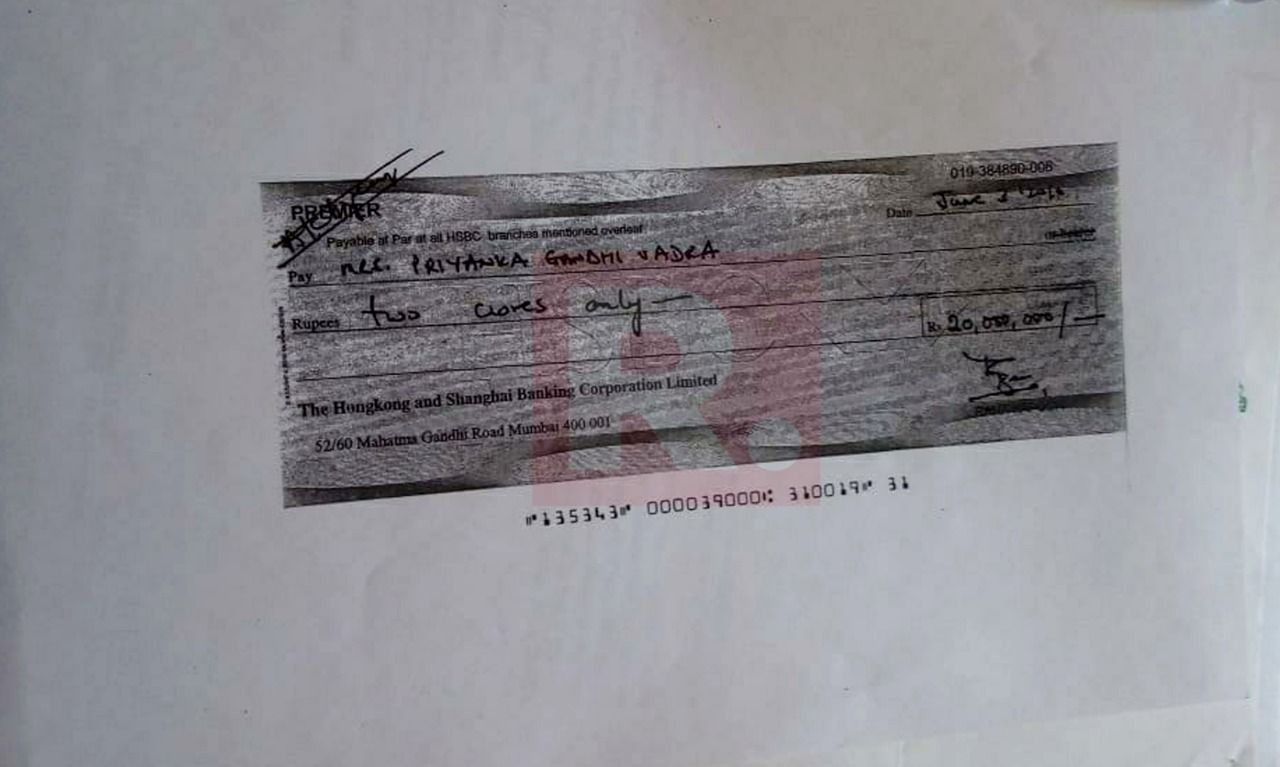 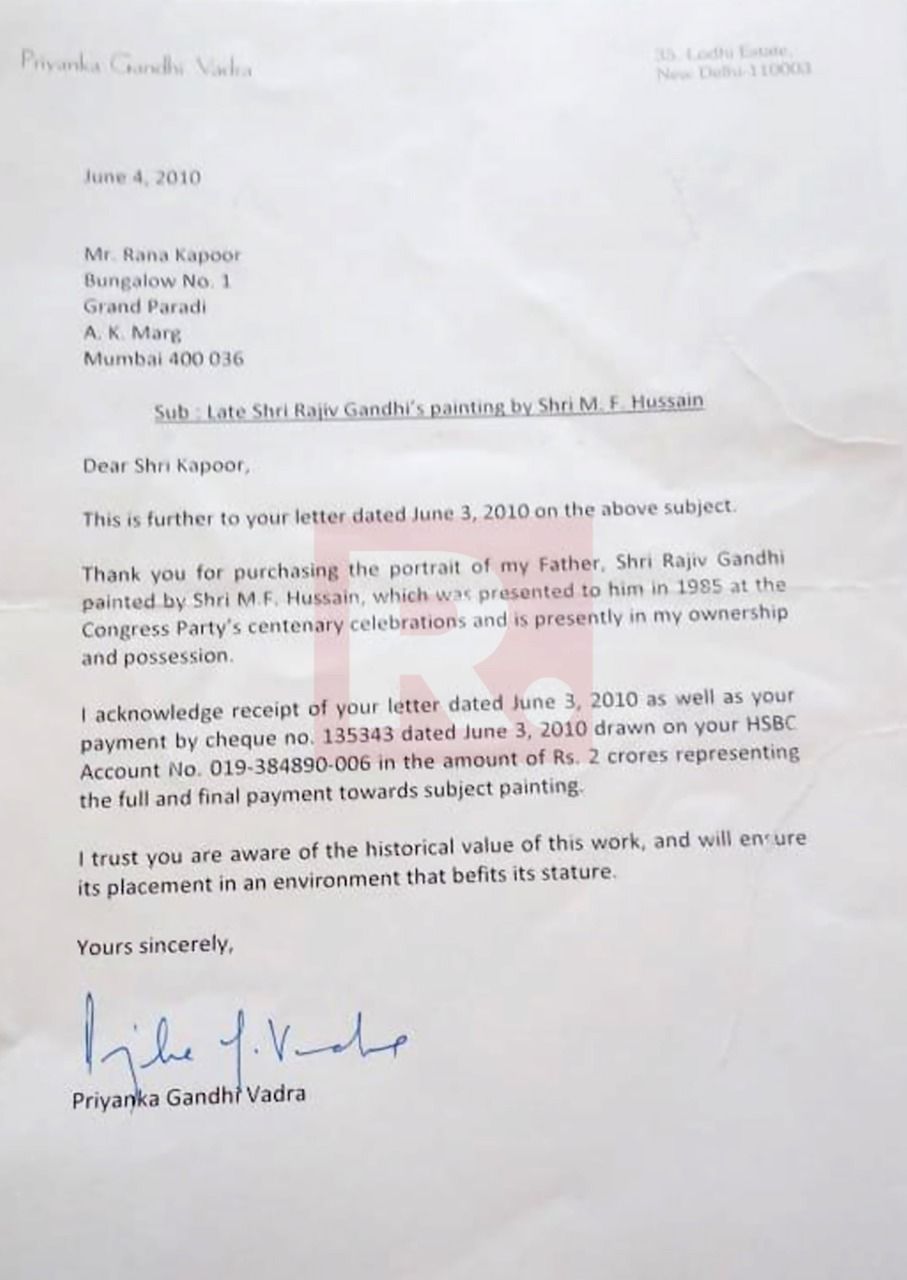 As per reports, the Enforcement Directorate is investigating the case of alleged kickbacks of Rs 600 crore received by a shell company controlled by the Yes Bank founder and his two daughters. Media reports suggest that the shell company Doit Urban Ventures received kickbacks from Dewan Housing Financial Corporation Ltd (DHFL) for loans worth Rs 4,450 crore granted by Yes Bank. The ED suspects that the amount of Rs 4,450 crore was siphoned off by DHFL through 79 dummy companies, including Doit Urban Ventures. He is the ED's custody after his arrest on Sunday till March 11. CBI too has registered a case against Kapoor, with a lookout notice against all Kapoor family members.

Yes Bank which has been facing a crisis as it accumulated many bad loans in 2018 by lending to corporate defaulters such as DHFL, Jet Airways and Cafe Coffee day, was put on a moratorium by RBI for a period of 30 days, capping its withdrawals at Rs 50,000. The RBI has also announced ‘Yes Bank Ltd. Reconstruction Scheme, 2020’ altering the authorised capital to Rs 5000 crores and 2400 equity shares standing at Rs 10 each. Moreover, SBI which leads the consortium of banks investing in the 'reconstructed bank' will not reduce its holding below 26% before the completion of three years.