After Andhra Pradesh CM Jagan Mohan Reddy's fiery attack at the state Election commissioner for postponing the local bodies polls, the top election officer Dr. N Ramesh Kumar, on Wednesday, as written to the Home Secretary seeking protection. In his letter, Kumar points out to 23 forced withdrawals and 55 incidents of violence perpetrated by the ruling party  - YSRCP against the BJP and the TDP. He slammed the Jagan government for verbally abusing him and stated that he and his family have been receiving repeated threats.

Explaining the unwillingness of political parties to campaign amid Coronavirus pandemic, he alleged that YSRCP had 'planted liquor' in several cases to 'frame Opposition' to arrest them under AP Ordinance. Moreover, he reaffirmed his decision to transfer some collectors and Dy. SPs, which has been challenged by the state government in the SC. Hence, in the environment of psychological terror and the current pandemic, Kumar asked permission to operate from Hyderabad, raising apprehensions on the State police. 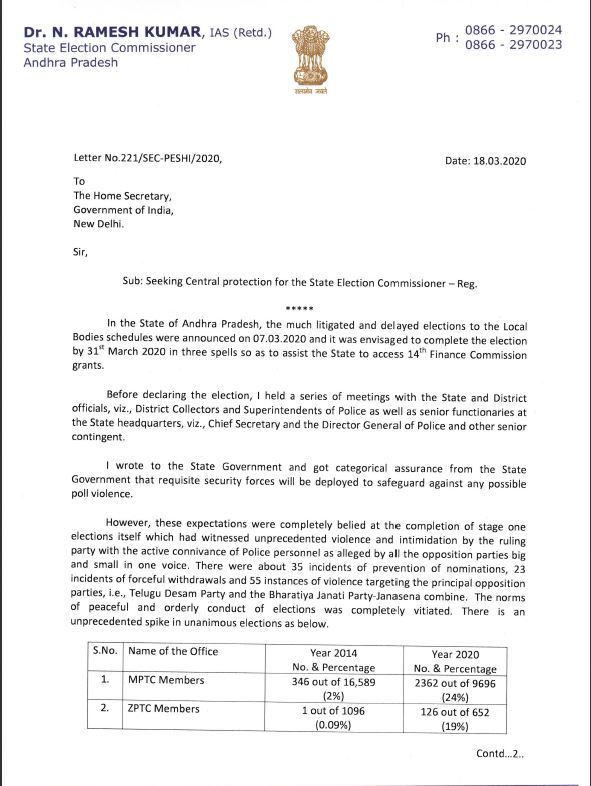 'Made mockery of Constitution', TDP lashes out at Jagan's fuss over poll postponement

Jagan lashes out on postponement of polls

On March 15, Andhra Pradesh CM Jagan Mohan Reddy lashed out at the  State Election Commissioner Ramesh Kumar for arbitrarily postponing of the rural and urban local body elections, while addressing a press conference at his legislative capital Amaravati. Claiming that his predecessor Chandrababu Naidu had appointed the Commissioner of 'his own caste', he slammed the transfer of collectors of Chittoor and Guntur districts, saying that if SEC is authorizing such transfers, 'Why was a government needed?'. He has also complained to Governor Biswabhusan Harichandan on the postponing of polls and has moved the apex Court challenging it.

"We did not appoint Ramesh Kumar as SEC, it was Chandrababu Naidu who appointed his own caste man. But how can he act in such discriminate fashion?" he lashed out.

The local body polls which were scheduled for 21-29 March, were postponed by the  Andhra Pradesh State Election Commission (APSEC) by six weeks due to the coronavirus scare and also owing to incidents of violence being reported since election dates were announced. All local body polls - Zilla Parishad, Mandal Parishad, panchayat, municipal bodies were deferred. TDP has come down heavily on the state government for questioning the APSEC’s move as fresh dates will be announced later this year.