In a shocking incident on Saturday, students of Delhi University's Gargi College alleged that they were molested by men during their annual college festival

In a shocking incident on Saturday, students of Delhi University's Gargi College alleged that they were molested by men during their annual college festival 'Reverie'. Releasing a statement, a Gargi college student alleged that on Saturday, "8000-10,000 individuals accumulated in their campus" by jumping the gates and damaged the property of Gargi. They allegedly manhandled, molested and groped the women students during the concert.

Notably, Gargi is a women's college and entry of men during the festival is only permissible if they have a valid ID card. However, students allege that due to laxity by the administration, non-teaching staff, police force, and the RAF, the influx of men continued without a valid pass and after the time allotted for outside students to enter.

Students breaking the college gate and entering in the college #gargicollege pic.twitter.com/fUL4fFGzA0

Moreover, the students also allege that they were not helped by their Principal Dr Promila Kumar. "Men stood in gangs and ogled at women, groped them, tried to feel them up, pushed them and touched them throughout the concert. Aggrieved students went to the principal to receive her apathy and insensitive comments. When the students tried to approach the principal wrt what was happening on the ground, she said that the students shouldn’t come to the fest if they felt unsafe," the statement by a student alleges. Meanwhile, the students have also planned a protest on February 10.

We, the student of #GargiCollege do not want things to be politicies at this moment. A lot of factually incorrect information is being passed on. Please keep reading this thread for our official statement regarding this.

When the initial reports of molestation on the campus came in, few students also alleged that the men were drunk, were affiliated to right-wing organisations, and were reportedly chanting Jai Shri Ram. However, the college administration has not yet confirmed the alleged incident. 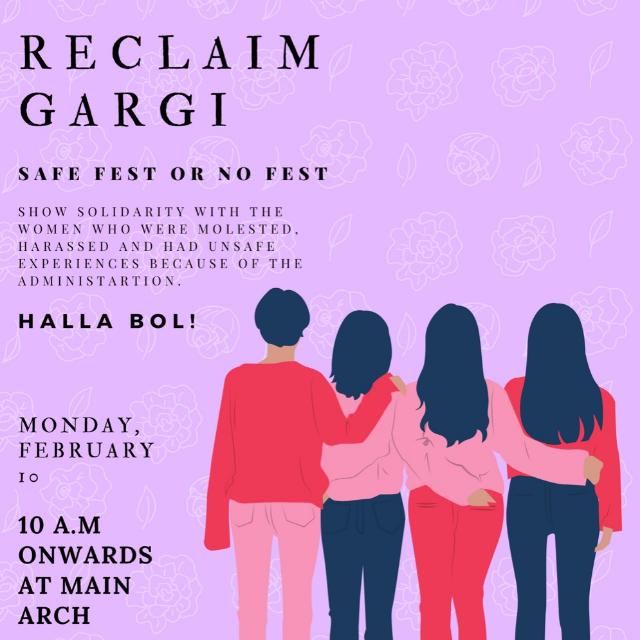 The Congress party's women's wing has condemned the attack but has jumped the guns to blame it on the right-winged group. "This cycle of violence and molestation of girls by a right-winged group is becoming far too common. The worst offenders of religion are usually the ones screaming God's name during the violence," the statement by the Congress said. Congress MP Sushmita Dev also asked individuals in the act to get away with it and no action is taken.

Violence on campus is becoming the new normal. How can they get away is the big question. What makes them so brazen about it. I condemn the violence & the sexual assault on the students. https://t.co/26JX9eQ9CE