Accepting defeat in the Karnataka by-polls on Monday Congress Legislative Party (CLP) chief Siddaramaiah has resigned from his posts after the declaration of results. Sources report that Karnataka Pradesh Congress Committee (KPCC) chief Dinesh Gundurao too is set to offer his resignation. Currently, as per EC trends, BJP has won 10 seats and is leading in 2 seats. Meanwhile, Congress has won 2 seats and an independent MLA is leading in one seat. Siddaramaiah has resigned from both LoP post and as CLP chief.

"I have tendered my resignation as leader of CLP and leader of Opposition. I have sent my resignation to Sonia Gandia, KC Venugopal, and Dinesh Gundurao. My expectations have been defeated," he said in a press conference. 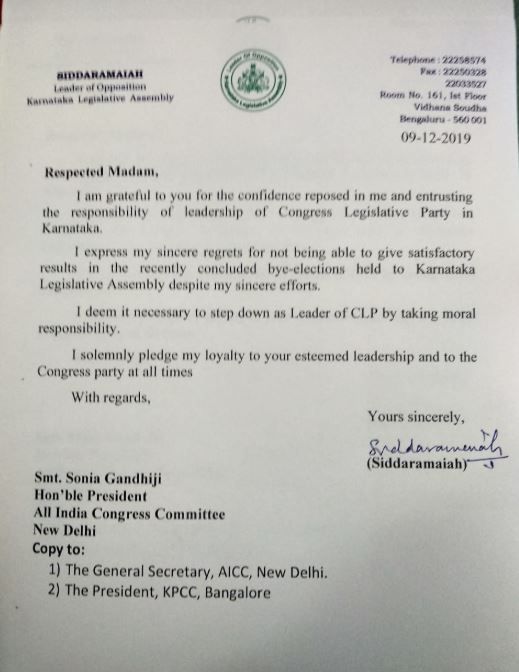 He said, "We have to agree with the mandate of the voters of these 15 constituencies. People have accepted the defectors. We have accepted defeat. I don't think we have to be disheartened. We need not lose hope, byelections are different than general elections. Results are results, I do not want to defer with the results. I am confident that as far as Karnataka is concerned, the Congress party has a very stronghold. It will not vanish. No one can remove Congress."

Looking to retaining power in Karnataka, BJP led by Chief Minister B S Yediyurappa on Monday took a lead of 12 of the 15 Assembly seats in by-polls held on December 5. BJP which fielded 13 of the 16 rebel MLAs, led the Congress which gained a lead in 2 seats and JD(S) which could not gain a single seat. Independent MLA is leading in one seat. Two seats from Maski and RR Nagar are still vacant.

The halfway mark in the 225-seat Karnataka assembly is 112. BJP which held 105 seats in the truncated Assembly has now increased its total to 117. Currently, the JD(S)-Congress holds seats combined tally of 102 (JD(S)-34 seats, Cong-68).  The by-polls which was necessitated by the disqualification of 17 rebel MLAs by Speaker Ramesh Kumar which made the Election Commission revise it to December 5 from October 21. This move was done as the Supreme Court allowed the rebel MLAs to contest in the Karnataka by-polls, post which 16 rebel MLAs promptly joined the BJP.