The Bihar Assembly secretariat has served a showcause notice to the driver of BJP MLA Anil Singh for violating the nationwide lockdown and travelling to Kota.

In a shocking decision, the Bihar Assembly secretariat has served a show-cause notice to the driver of BJP MLA Anil Singh for violating the lockdown and travelling to Kota on a vehicle pass issued by the SDO of Nawada. BJP MLA  Anil Singh in the capacity of Whip of the BJP legislature party has been provided with an official vehicle along with a driver from the Bihar Vidhan Sabha. The Vidhan Sabha secretariat has served a show-cause notice to the government driver Sheo Mangal Chowdhary as to why did he take the official vehicle BR-1PJ-0484 outside the state without permission of Vidhan Sabha office. 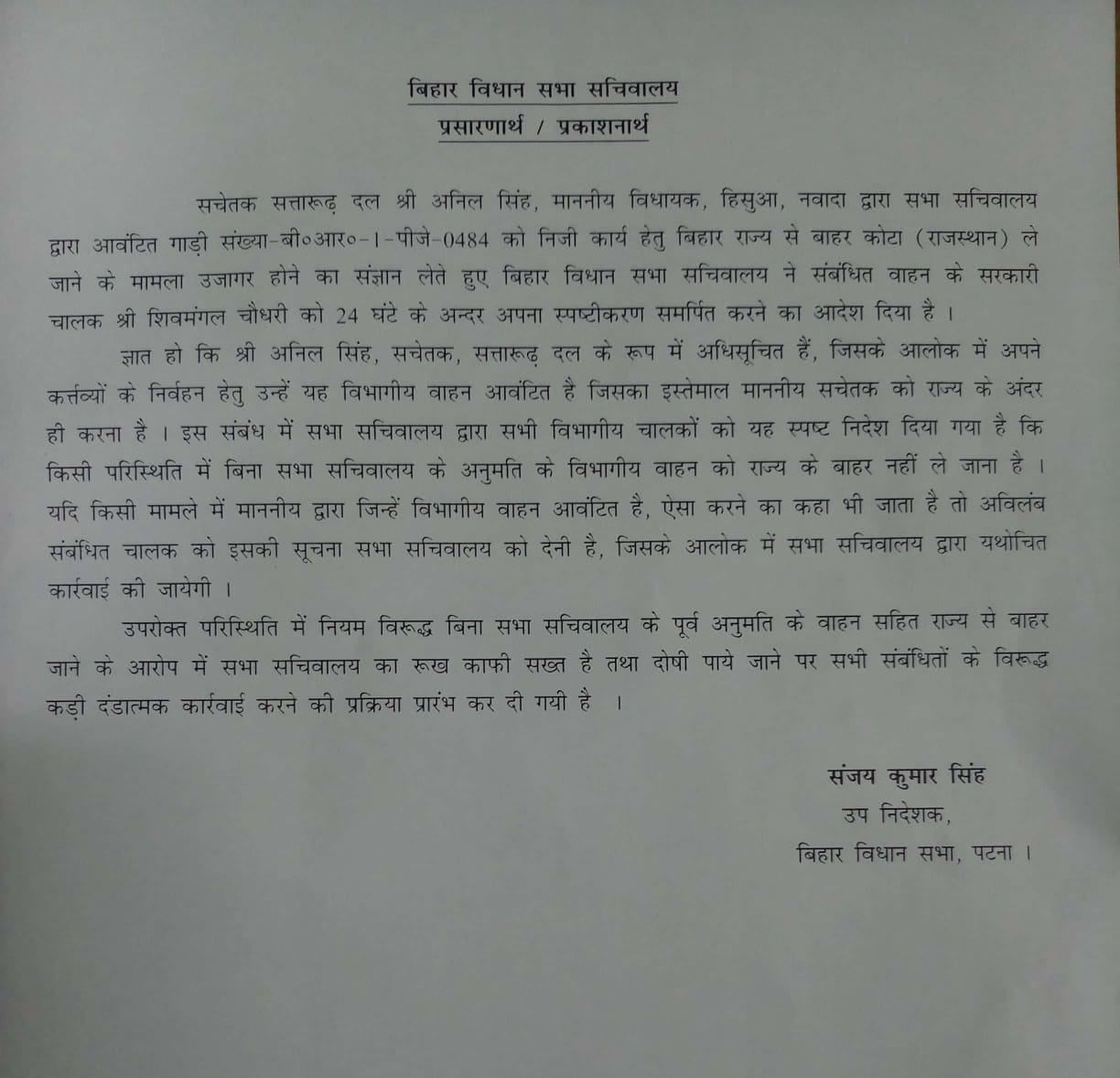 'The driver is not at fault'

Bihar Assembly Speaker Vijay Chowdhary said," BJP MLA Anil Singh by Virtue of being the whip of the BJP legislature party in Vidhan Sabha has been provided with an official vehicle.  But the driver of the vehicle before venturing outside the state has to inform or seek permission from the Bihar assembly secretariat, which he failed to do. Henceforth, a show-cause notice has been served upon him to be replied within 24 hours. If the assembly secretariat is not satisfied with his reply, then action will be taken against the driver."

BJP MLA Anil Singh is maintaining that he did travel to Kota but with due permission from the administration as his 18-year-old daughter was unwell in Kota amidst lockdown.  BJP MLA Anil Singh while speaking to Republic TV over the phone said," I had sought permission for 2 vehicles. One for my official vehicle Scorpio and the other for my personal vehicle which is a Toyota Fortuner. I travelled to Kota on my personal vehicle since it was a long drive to Kota from Nawada. I did not travel on the official vehicle and the driver is not at fault."

Read: People At Corona Disaster Relief Camps In Bihar To Get Facilities Given At Time Of Flood: Nitish

Meanwhile, the Bihar government is also likely to serve a show-cause notice to the SDO of Nawada who issued the vehicle pass to the BJP MLA to travel to Kota. It is expected that some action will be taken against the SDO by the Bihar government. After the BJP MLA, JDU MP Santosh Kushwaha also violated the lockdown and travelled to his Parliamentary constituency Purnea from Delhi on 13th April.