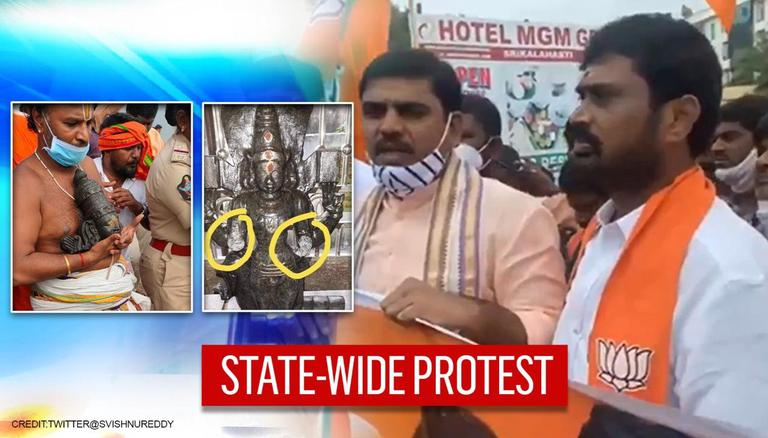 Amid the row over the vandalism of temples in Andhra Pradesh, the state unit of BJP has planned to launch a protest across the state after the party's state president Somu Veerraju was arrested during Dharma yatra to Ramatheertham temple where 400-year-old Lord Ram idol was desecrated. The BJP and Jana Sena members were put under house arrest ahead of their Ramateertham Dharma Yatra while the state president was arrested by the Andhra Pradesh Police. The decision by the BJP to hold agitation has come in the wake of a series of incidents of temple vandalism occurred in the state within a span of 10 days.

The recent incidents of vandalism began with the desecration of 400-year-old Lord Rama idol at the famous Ramateertham temple of Vizianagaram district. On December 29 morning, one of the priests found the doors of the ancient Sita Lakshmana Kodandarama temple broken open and the Ram idol in the sanctum sanctorum beheaded. The severed portion of the statue was retrieved from the nearby temple pond on the next day.

Thereafter, Lord Subrahmanya Swamy's idol in Lord Vigneshwara temple of Rajahmundry district was found in a desecrated condition on Friday.  The vandalism seemingly took place on the intervening night of December 31 and January 1. On January 3, yet another incident of vandalism occurred with Goddess Sita idol found broken in the Sitaram Temple near Pandit Nehru Busstop in Vijayawada.

Massive outrage was expressed by the opposition which slammed the ruling YSRCP government. TDP chief Chandrababu Naidu has slammed the chief minister while claiming that over 120 attacks took place on temples as per a premeditated plan in last 19 months and over 23 idols were demolished recently in six temples at Pithapuram. Jana Sena leader Pawan Kalyan had demanded a CBI probe into the incidents targeting the religious institutions of a particular community.

"Yet another shocking incident took place in Vijayawada today. A 40-year-old Sita Mata idol was vandalised by anti-Hindu forces. On December 28, a 400-year-old idol was vandalised. Why is Chief Minister Jagan Mohan Reddy not doing anything? Law and order is a state subject. If he is not able to handle this then he should step down," Deodhar said in a recorded video message.

"In one and a half years of Jagan's rule, more than 150 temples or idols or symbols have been burnt or destroyed. Why is there state-sponsored proselytization?" he added.

Reacting to the criticisms of the opposition, CM Jagan Mohan Reddy has ordered a CID inquiry to probe the desecration of Lord Ram idol in Ramateertham of Nellimarla Mandal in Vizianagaram district. He termed the desecration of temples in the state as 'political guerrilla warfare".

"These people are not even sparing God and dragging him into politics. They have no fear of God nor do they revere him, except that they seek to derive political benefit in the name of God," the Chief Minister said in a veiled attack on the opposition without naming anyone.

Other vandalism incidents in the past

Apart from the aforementioned recent incidents, there have been a series of incidents of temple vandalism in Andhra Pradesh in the past. In September as well, a 'Nandi' idol was reportedly vandalised in a temple in Chittoor district. The Police had then alleged that the vandals had broken open the idol based on rumours that gold had been poured into the Nandi idol. On finding nothing, the men left the temple. Moreover, a 62-year-old heritage chariot parked at ancient Antarvedi Lakshmi Narasimha Temple premises was found burnt in suspicious circumstances with the opposition alleging a conspiracy behind the chariot fire.