Inspite of 'clarification' of the '2-hour meeting' between Shiv Sena's Sanjay Raut and BJP's Devendra Fadnavis, sources report that NCP and Congress are upset 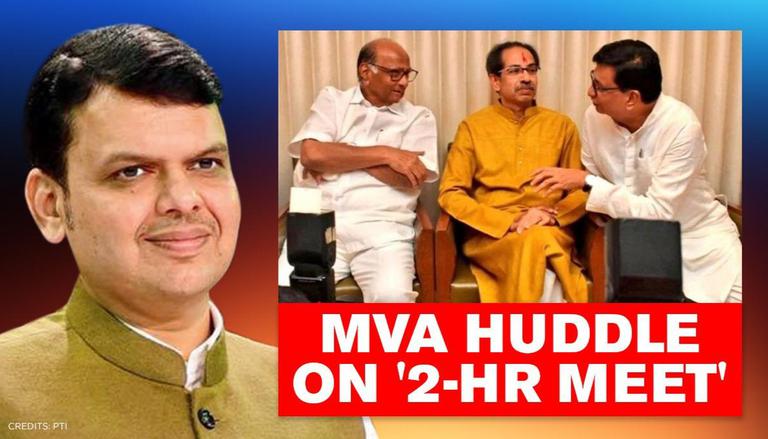 Inspite of 'clarification' of the '2-hour meeting' between Shiv Sena's Sanjay Raut and BJP's Devendra Fadnavis, sources report on Sunday that NCP and Congress are upset over the meeting between the former allies. Sources report that Maharashtra Congress chief Balasaheb Thorat and NCP chief Sharad Pawar are reportedly at Uddhav Thackeray's home- 'Matoshree' to discuss the same. Both Fadnavis and Raut have stated that the meeting was 'non-political' and pertained to an 'interview'.

On Saturday, the ex-Maharashtra CM met with the Shiv Sena MP at a luxury hotel in Mumbai and held a 2-hour meeting.  While this meeting between the former allies had set political circle atwitter, BJP Maharashtra spokesperson Keshav Upadhye clarified that the meeting was for Fadnavis' tentative interview for Shiv Sena mouthpiece Saamana with Raut, post- Bihar polls. He said that while the interview has been fixed, Fadnavis has told Raut to air the interview unedited, reportedly insisting on his camera to be present. Fadnavis will be the second non-Shiv Sena leader which Saamana will be interviewing after NCP Supremo Sharad Pawar.

As several political leaders like Congress' Sanjay Nirupam and NCP MP Majeed Memon raised questions on the meeting, Raut confirmed the meeting was for a 'Saamana' interview, maintaining that the political dimension in the state will not change. Agreeing to Sena and BJP's 'ideological differences', he said that the two parties are not enemies. He added that Chief minister Uddhav Thackeray was aware of the meeting with BJP leader.

But Raut as been vocal in his attack on BJP since the 35-year alliance split over a variety of issues like - Ram mandir, Jalyukt Shivar scheme, Metro car shed, NRC, CAA, Farm Bills, COVID and the most recent - Sushant Singh Rajput's death probe and Kangana Ranaut's attack on Mumbai police. Fadnavis too has criticised the Sena government's ineffective COVID management, the SC stay on Maratha reservation, scrapping gram panchayat polls amid the pandemic. Fadnavis is the BJP's election in-charge in Bihar along with Bhupendra Yadav.

Prior to the 2019 Maharashtra state polls, Shiv Sena had reiterated that it will accept only the 50:50 formula, while BJP denied ever having agreed to such a formula. It allegedly offered 13 cabinet portfolios to Sena while keeping 26 for its ministers. Apart from Sena's portfolio demand, the party had demanded a sharing of 2.5 years in the CM post too; this has been refused by Devendra Fadnavis, stating, 'The next govt will be formed under a BJP CM.' With no respite to the deadlock, Sena allied with NCP-Congress and Thackeray was sworn-in as the first Thackeray CM on November 27.