'I Have Not Seen It': Rajasthan Min On Delhi Police's Notice To His Son Over Rape Case

The Delhi Police pasted a summon outside Rajasthan minister Mahesh Joshi's house asking his son Rohit Joshi to appear before it over an alleged rape case. 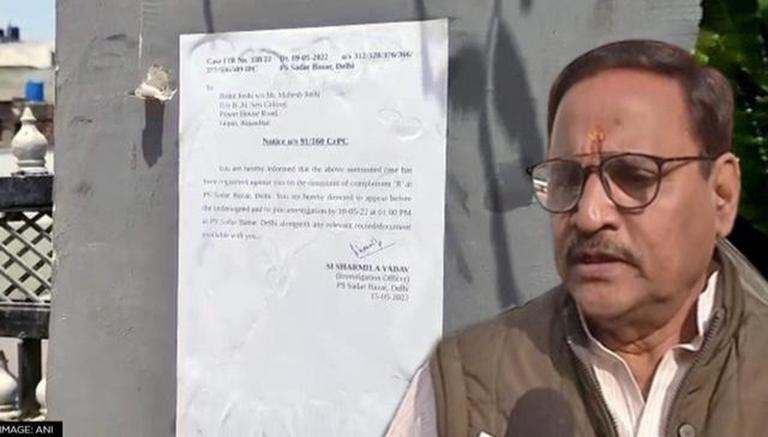 
In a key development, a 15-member team of Delhi Police officials arrived in Jaipur on Sunday morning to arrest Rajasthan Water Resources Minister Mahesh Joshi's son Rohit Joshi, who is accused of raping a 24-year-old woman. Following this, the Delhi Police pasted a summon outside Rajasthan minister Mahesh Joshi's residence asking his son Rohit Joshi to appear before it by May 18 in the alleged rape case. Reacting to the summon, Mahesh Joshi stated that he was yet to see the notice.

Mahesh Joshi, while speaking about the Delhi Police's notice, stated that he came to know about the Police visit through news channels. The minister further added that he would cooperate with the police in the investigation. “I also got to know through the channels. I have not seen it yet,” Joshi said while reacting to the summon notice for his son.

“I will cooperate with the police. The police should investigate properly and bring the truth forward. I am with the truth,” Joshi said. He further added that the police had only reached today and therefore, the media trial must be avoided. “I won't say much. Anything I say can influence the investigations. Only today police have reached. Before this, no one asked for him. There should be no media trial,” Joshi said while adding that he will cooperate with the police in the investigation.

A 15-member team of Delhi Police has pasted a summon outside Rajasthan minister Mahesh Joshi's house asking his son Rohit Joshi to appear before it by May 18 in an alleged rape case pic.twitter.com/jH43dUyikZ

Under the leadership of Delhi ACP, the Police visited both the residences of the minister on Sunday morning and Rohit Joshi was not found there. After this, when the police team reached the Mahesh Joshi's house at civil lines and neither Joshi or Rohit was not found. However, the Delhi Police will be staying back in Jaipur and keep tracking their sources in order to nab Rohit Joshi. A 24-year-old girl had filed a rape case against Rohit at Sadar Bazar police station in Delhi and accused him of raping her on several occasions.

Earlier this week, Congress Minister Mahesh Joshi had broken his silence over rape allegations against his son and said that he was unaware of the matter and only heard of it through the media. Stating that he stands by truth and justice, the minister said the truth will prevail following investigations into the case. The minister had further urged the media to not assume conclusions and let the police do their work. "I'm with truth throughout my life".