Taking to Twitter on Tuesday, Sibal took a jibe at Ranjan Gogoi and drew a comparison with Justice H R Khanna. Justice Khanna, who tilted the balance in a 7-6 majority that coined 'inviolability of basic structure of Constitution' in the Keshavananda Bharti judgment [1973 (4) SCC 225], became a beacon of judicial independence when he refused to bend before the Indira Gandhi government's reign during the Emergency.

1) his integrity
2)standing up to govt.
3) upholding rule of law

lapping up a Rajya Sabha nomination for

1) being saved by govt.
2) standing in line with it
3) compromising his own and the integrity of the institution

Earlier, several other opposition leaders including Sitaram Yechury and Asaduddin Owaisi slammed the Centre over the nomination of justice Gogoi. Yechury had quoted one of Gogoi's remarks where he said that appointments of retired judges in such political posts are "a scar on the independence of the judiciary". The communist leader also referred to the Modi government's appointment of another ex-CJI, P Sathasivam as Governor of Kerala in 2014.

According to a notification issued by the Centre on Monday, the President has, under clause (1) of Article 80 of the Constitution, nominated the former CJI to fill the vacancy in Rajya Sabha due to the retirement of one of the nominated member. Gogoi had retired from the Supreme Court on November 17 after pronouncing the historic Ayodhya verdict. 51 seats in Rajya Sabha will fall vacant in April, five more in June, one in July, and 11 in November this year. 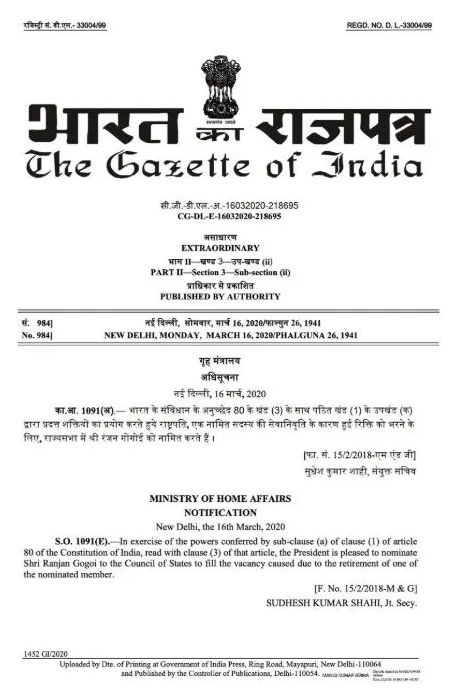 READ: 'Politician or judge all along?' asks TMC MP over ex-CJI Ranjan Gogoi's nomination to RS