16 political parties led by the Congress are set to boycott President Ram Nath Kovind's joint address in the Parliament on 29 January, Ghulam Nabi Azad informed on Thursday. The senior Congress leader informed of the decision of 16 parties to jointly boycott the President's address citing the forceful passing of the farm laws without Opposition as the major reason. Apart from the controversial farm laws, Ghulam Nabi Azad also pointed at the economic situation of the country and the show-down between India and China as some of the other reasons for the Opposition to boycott the President's address. 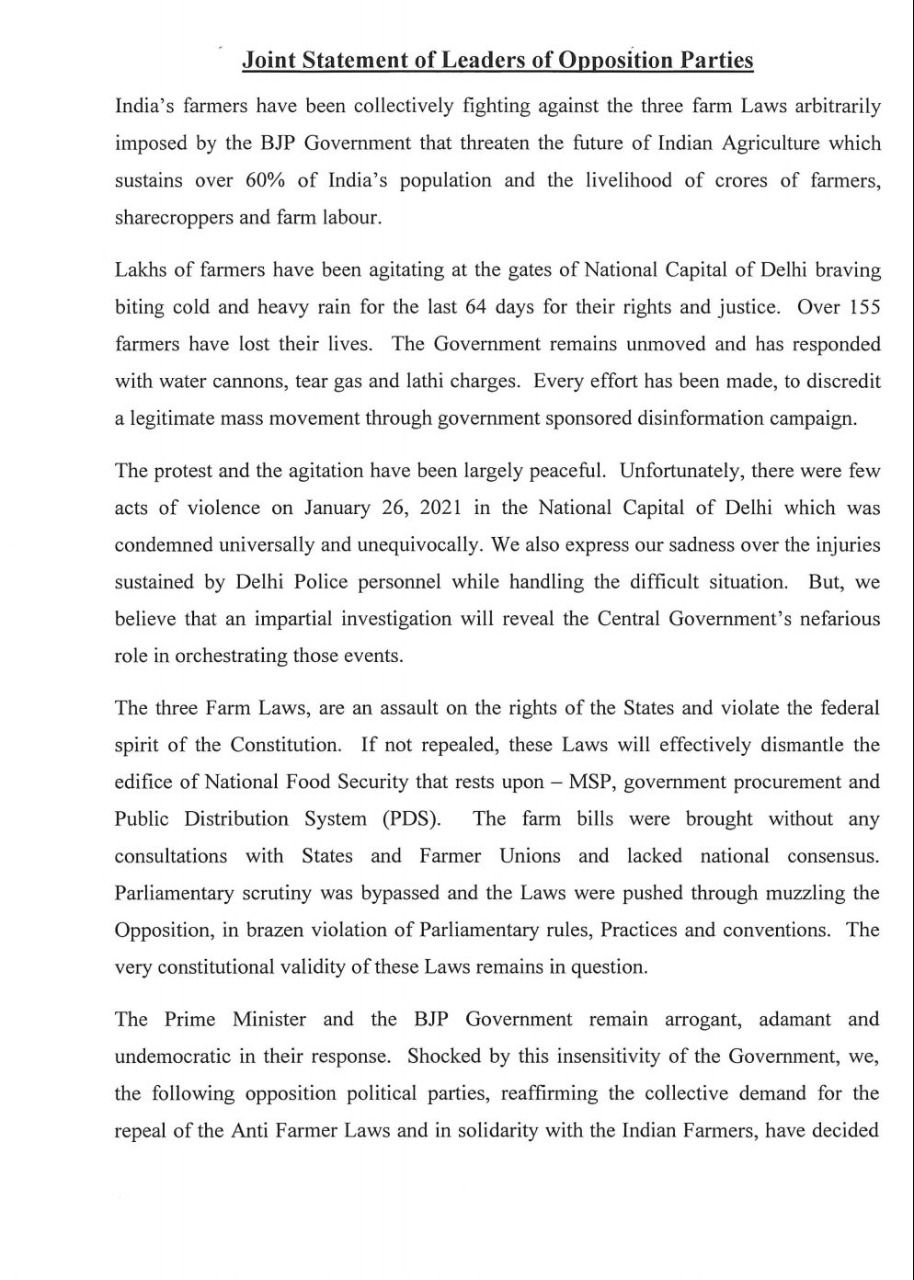 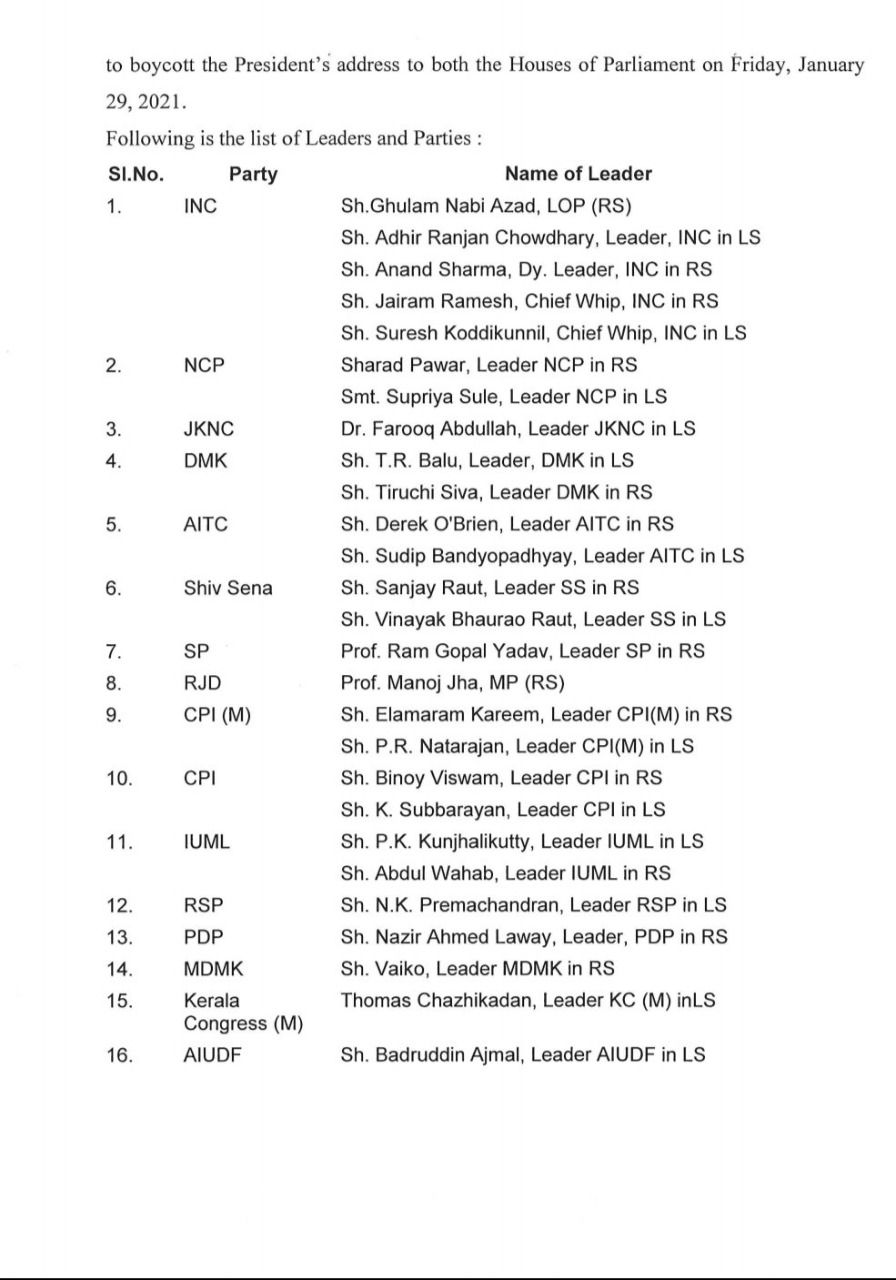 The Delhi Police had permitted farmers to take out the tractor rally on three routes emanating from the Singhu border, the Tikri border and the Ghazipur border covering 62 km, 60 km and 46 km respectively. Darshan Pal, Rajinder Singh, Balbir Singh Rajewal, Buta Singh Burjgil and Joginder Singh Ugraha were asked to coordinate with the police during the rally. Additionally, the Police mandated that a maximum of 5000 persons with 5000 tractors can participate in the Republic Day rally from noon to 5 pm.

However, the rally took a violent turn after groups of farmers broke police barricades at the Delhi border to enter the national capital before the allocated time. As per visuals, some of the protesters vandalised a DTC bus and drove tractors to deliberately run over the police personnel at ITO in central Delhi. In a clear violation of the conditions laid down by the police, farmers were seen carrying sticks and riding horses, even bearing swords and other weapons. Thereafter, the anti-farm laws protesters entered the premises of the Red Fort and unfurled their own flags from its ramparts.

Speaking to the media, Delhi Police Joint CP Shalini Singh revealed that some of the farmers had attacked police personnel. In wake of the current situation, the internet services were temporarily suspended in the areas of Singhu Ghazipur, Tikri, Mukarba Chowk, Nangloi and their adjoining areas till 11.59 pm on January 26. The crackdown on the rioters has been initiated but no serious arrests appear to have been made so far, even though notices have been issued to almost two dozen farmer netas seeking explanation.

The Farmers' Produce Trade and Commerce (Promotion and Facilitation) Act, 2020 aims at freeing the farmers from the constraints of the state Agriculture Produce Market Committees whereby they would be able to sell their produce anywhere. Meanwhile, The Farmers (Empowerment and Protection) Agreement of Price Assurance and Farm Services Act, 2020 protects and empowers farmers to engage with processors, wholesalers, large retailers, exporters for farm services. This entails the provision of contract farming. On the other hand, The Essential Commodities (Amendment) Act, 2020 specifies that the supply of foodstuffs including cereals, pulses, potato, edible oilseeds, and oils shall be regulated only under exceptional circumstances.

Meanwhile, the scheduled day for the farmers' march to parliament is on the same day Union Finance Minister Nirmala Sitharaman will present the first 'Paperless Budget 2021'. The Centre decided not to print documents related to the Union Budget for the fiscal beginning of April (FY 2021-22). All MPs will get soft copies of the budget and Economic Survey that contains an account of the state of the economy. The Budget documents will be available on the Mobile App - “Union Budget Mobile App” after the completion of the Budget Speech by the Finance Minister in Parliament on 1st February 2021. The two-part Union Budget session will start from January 29 till February 15 and the second session will take place between 8 March and 8 April.