Penning a letter to Sonia Gandhi, Mumbai Congress General Secy requested her to take a firm decision on the future of the party viz-a-viz the MVA alliance

Penning a letter to Congress interim president Sonia Gandhi, Mumbai Congress General Secretary Vishwabandhu Rai has requested her to take a firm decision on the future of the party viz-a-viz its alliance with Shiv Sena and NCP in Maharashtra. In what is yet another incident showing all isn't well within the Maha Vikas Aghadi alliance in Maharashtra, Rai has said that party leaders of MVA are allegedly involved in various scams like the PMC bank scam. He has said that due to the misdeed of MVA leaders, Congress will pay the price in upcoming elections and hence the grand-old party must reconsider its options.

Earlier, Vishwabandhu Rai had stated that the Congress leaders are being sidelined in the Maharashtra Vikas Aghadi government and the Nationalist Congress Party (NCP) is "weakening the Congress party like termites weaken wood". 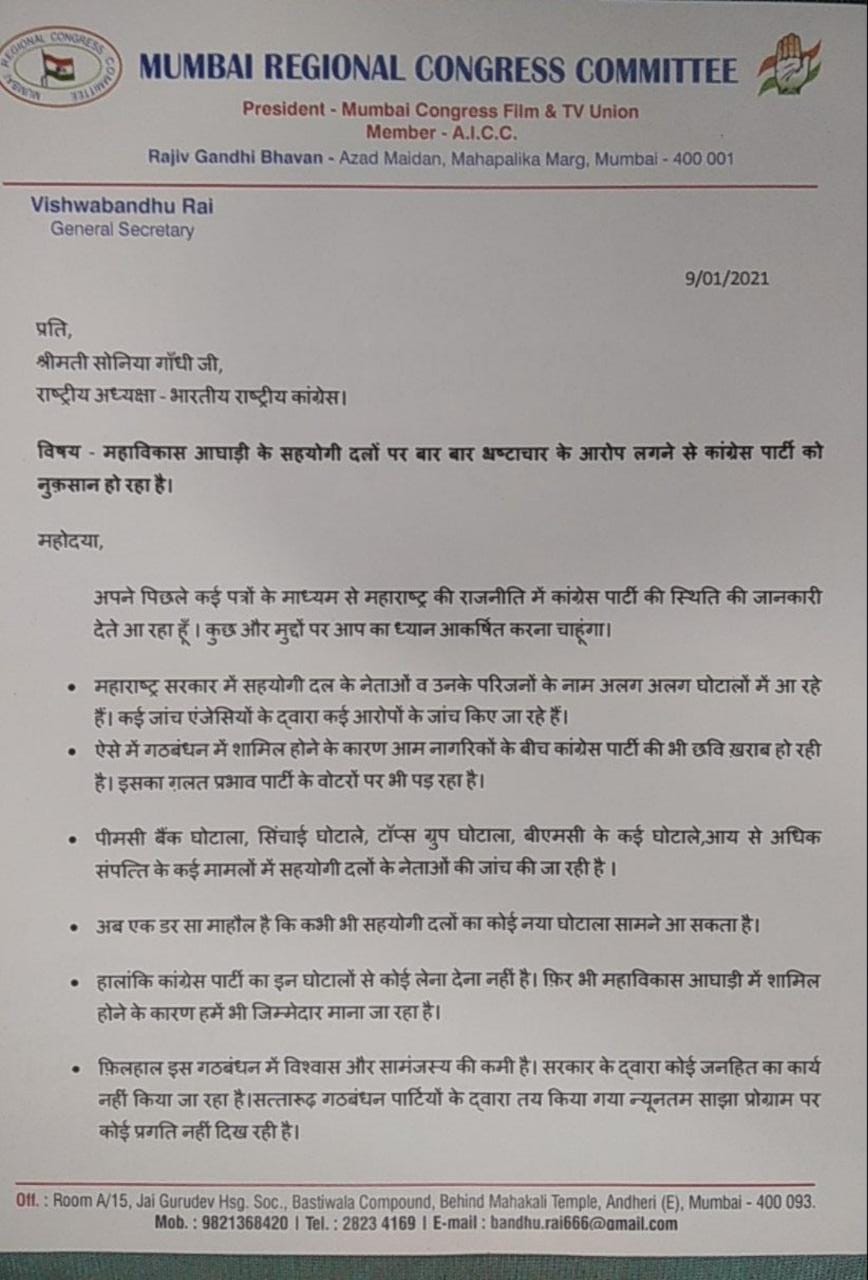 In a massive jolt to Maharashtra Congress, its state chief Balasaheb Thorat has offered to resign from the post of party chief, reports sources on Monday. Thorat's offer to resign comes amid the grand old party's plans to restructure the state Congress. As per sources, an urgent meeting has been called over the Maharashtra Pradesh Congress Committee (MPCC) chief post. Thorat, a close aide of Rahul Gandhi, has been facing massive backlash from Congress leaders over NCP or Shiv Sena and has had to often paly the peacemaker. Moreover, Sonia Gandhi has taken audio votes of around 1000-odd party leaders from the state for selection of new leadership in Maharashtra.

Since Maharashtra govt's cabinet expansion in January 2020, discontent in the Congress party surfaced between Maharashtra cabinet minister Ashok Chavan and Balasaheb Thorat with both senior leaders reportedly demanding the Revenue and PWD portfolio. Moreover, other Congress leaders like Nitin Raut and Vijay Wadettiwar too had demanded the PWD ministry. While Thorat and Chavan were allotted the Revenue ministry and the PWD ministry respectively, Raut, Wadettiwar and Sunil Kedar were among 10 ministers of the Congress who found a place in the new government.

However, the choice of certain leaders is ministers and portfolio allocation seems to have not gone down well with a section of Maharashtra Congress. A senior Maharashtra Congress leader questioned the integrity of MLAs Aslam Sheikh and Vishwajit Kadam on Tuesday who was inducted into the new cabinet, claiming that both the leaders were reportedly keen to jump the ship to the BJP prior to the Assembly polls held in October last year. Moreover, Congress Mumbai Congress General Secretary Vishwabandhu Rai has written a letter to interim president Sonia Gandhi stating that the party is being sidelined in the state government and the NCP is "weakening the Congress party like termites weaken wood". Recently, Congress has been miffed with Shiv Sena's comments on Sonia Gandhi's UPA chairmanship with Chavan saying, "Sena not part of UPA".

Meanwhile, at the national level, Congress' Central Election Authority (CEA) is updating party delegates’ list, logistical preparedness and time frame for notifying the poll schedule and date of voting for the next party chief.